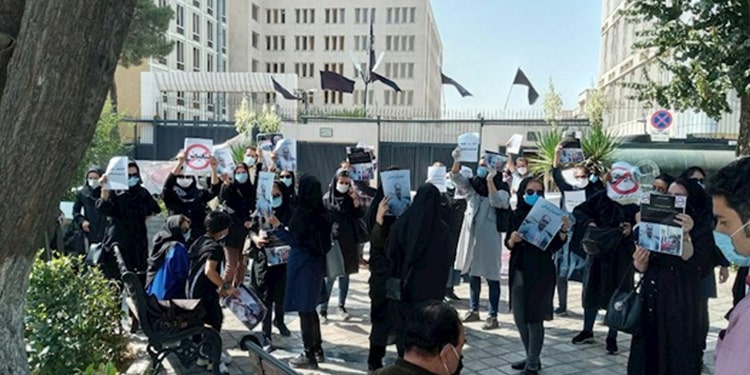 Healthcare workers held a protest outside the parliament in Tehran on October 4 and 5.

Women widely participated in protests of teachers, doctors and nurses

Iranian women widely participated in protests of various social sectors in Tehran and other cities from October 4 to 15.

One month past the reopening of schools and despite shortage of teachers, the Department of Education of Zanjan has failed to recruit and employ enough teachers. Some schools in Zanjan lack teachers. For example, the school for the deaf do not teachers for the third and fourth grades.

Another protest took place in the city of Bagh-e Malek, Khuzestan Province. Dozens of pre-school teachers held a protest outside the Governor’s Office in Bagh-e Malek on October 14 and 15. Their protest was against the dismissal of a group of teachers who had more than 6 years of experience in this job.

Another group of pre-school teachers held a protest in Ahvaz outside the Department of Education of Khuzestan Province, on October 10. They also demanded the department to determine their employment status. Since two years ago, members of the mullahs’ parliament had promised these teachers to have them employed. But they have not yet delivered on any of their promises.

Women widely participated in all of the above protests.

Protests by doctors and healthcare workers

Doctors, nurses and healthcare workers formed another disgruntled sector who spoke out against the regime’s policies in recent weeks. Women widely participated in the protests.

This service sector has been working hard round the clock for nine months since the outbreak of the pandemic. But they have not received their deserved rights and salaries.

500 physicians working with the Medical Sciences University of Shiraz held a protest on October 7, 2020. Their protest focused on the Plan for Family Doctors.

One of the protesting physicians explained: “According to this plan, patients are granted free visits and injections. Instead, the government must pay the physicians for each patient. But since the government is economically poor… they refuse to pay the doctors.”

The retired employees of the Health Ministry working with the Medical Sciences University of Gilan held a protest on October 15. They said the ministry had failed to pay for their hard work.

Another group of healthcare workers held a protest outside the parliament in Tehran on October 4 and 5. They said they did not have job security and their employment status is in limbo. The nurses participating in this protest said the private company contracts are discriminatory. They demanded to receive the special fees granted to nurses.

On October 11, the laboratory employees of Alzahra Hospital of Rasht wrote an open letter in which they demanded job security. They said a new company is supposed to take over the laboratory with its own personnel. In this case, many of the employees will be dismissed despite more than 10 years of experience in this lab.