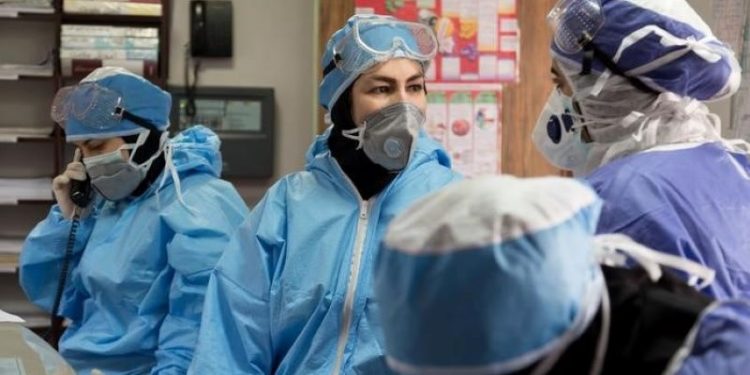 The Revision Court of Tehran Province banned a female physician from practicing her profession after her husband filed a complaint.

The situation is aggravated by serious shortage and widespread infection and deaths of physicians, nurses and medical staff which disables many of them from carrying out their duties.

In such circumstances, the Iranian Judiciary removes a physician from her job because of her husband’s complaint.

According to the clerical regime’s Civil Code, Article 1105, “the family is headed by the husband and the woman may not leave home without the husband’s permission.”

Article 1117 adds: “The husband can prevent his wife from engagement in any profession or industry that contradicts family interests or his own or the wife’s dignity.”

The female physician was an emergency room specialist at Imam Hossein and Baghyatollah hospitals. One of the close relatives of this female physician said her husband had filed a complaint with the court in August. He claimed his wife’s presence in hospitals had disrupted the clam of their life.

The court did not grant his request at the time indicating that their marriage certificate contained a statement saying that the woman was a medical student, something that the husband had accepted at the time of marriage. Secondly, there was no proof that the woman worked in private hospitals. Thirdly, the court recognized that due to the pandemic, all doctors and physicians were working overtime and she was not doing anything wrong.

The physician’s husband had written in his appeal that his wife works in several hospitals and this had disrupted their life and her duties towards the family, shaking the family’s foundations.

The female physician was on call only two nights a week. She had picked the two nights such that they would coincide with her husband’s business trips. Her husband has two jobs and has to travel a lot to other provinces. Interestingly, she had chosen the emergency room specialty with the agreement of her husband.

This is not the first time that a woman is deprived of doing her job because of her husband’s complaint. Eight Iranian women, national team members, were forbidden by their husbands from leaving the country to participate in international tournaments.

The women banned from leaving the country due to their husband’s disagreement included Zahra Nemati, member of the shooting national team and the standard bearer of Iranian athletes in the Olympic games.

Back in 2015, the captain of women’s national futsal team was deprived of participating in Asian tournaments because of her husband’s complaint.

Niloufar Ardalan missed the Asian Championship in October 2015 and did not go with her team, because her passport was confiscated upon her husband’s complaint.

Zahra Safaei suffers heart stroke after being harassed and mistreated