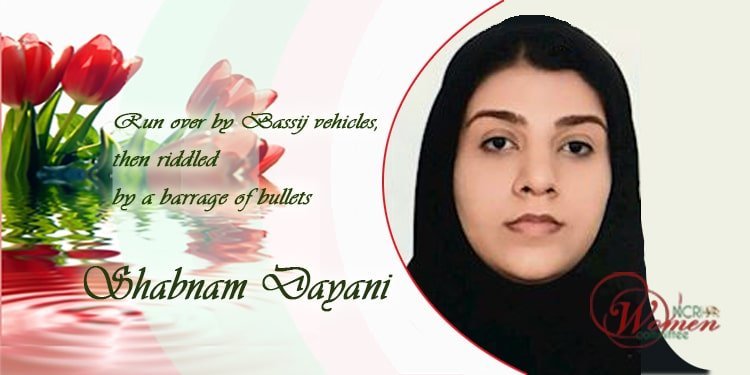 Shabnam Dayani is one of the martyrs of the November 2019 nationwide uprising in Shiraz. She was killed on Saturday, November 16, 2019.

Shabnam Dayani and 12 others were run over by the vehicles of the IRGC-paramilitary force, the Bassij.

The Bassij agents subsequently opened a barrage of fire on all of them.

According to an eye witness, when Shabnam’s family went to collect her body, the authorities threatened them, instructing them to do interviews and declare her death an accident.

Her family, however, refused to do so.

Shabnam’s body was handed over to her family with a two-day delay and was transferred to Behbahan.

At the time of her burial, security forces sent from Ahvaz attempted to clash with the participating crowd, but the mourning participants pushed them back and continued to accompany the ambulance carrying Shabnam Dayani’s body to the cemetery.

Bassij agents ordered Shabnam’s family to use the white gravestone which is exclusive to the Bassij, to conceal the regime’s involvement in the death of Shabnam Dayani.