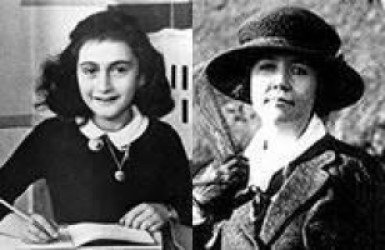 The face of Anne Frank is one of the most well-known images of the Holocaust.

Anne Frank was born to a Jewish family in Frankfurt, Germany in 1929. When, in 1933, the Nazis came to power in Germany, her family thought they would be safer in Holland, so went to live in Amsterdam. For a few years they were safe. However, in 1940, the Germans occupied Holland. The family was once again living under Nazi control.

On 6 July 1942, a month before Anne’s 13th birthday, the family went into hiding in a part of Otto’s office building. Within a few months, four other people joined them. Four of Otto’s staff knew about the hiding place and helped them survive.

By August 1944 Anne Frank and her family had been in hiding for just over two years. The Franks were then betrayed. On 4 August 1944, the Nazis found out about the hiding place and raided the office, arresting all eight people. All were sent to Westerberg, a transit camp near Amsterdam. From there they were sent to Auschwitz-Burkina on the last ever transport from Westerberg to the camp. Anne’s mother, Edith died in Auschwitz.

Anne’s father Otto was the only member of the whole family who survived the Holocaust. He was liberated from Auschwitz on 27 January 1945. Later he returned to Amsterdam. On his return, Miep Giese, one of his workers who had helped the family during their two years in hiding, gave him the pages from Anne’s diary that he had saved from the hiding place. In 1947, Otto published the diary.

Anne Frank’s diary remains one of the best-known published works throughout the world.

1968-Rose Wilder Lane (December 5, 1886 – October 30, 1968) was an American journalist, travel writer, novelist, and political theorist and the daughter of American writer Laura Ingalls Wilder. Along with Ayn Rand and Isabel Paterson, Lane is noted as one of the founders of the American libertarian movement.

The threat of America’s entry into World War I had seriously weakened the real estate market, so in early 1915 Lane accepted a friend’s offer of a stopgap job as an editorial assistant on the staff of the San Francisco Bulletin. The stopgap turned into a watershed. She immediately caught the attention of her editors not only through her talents as a writer in her own right, but also as a highly skilled editor for other writers. Before long, her photo and byline were running in the Bulletin daily, churning out formulaic romantic fiction serials that would run for weeks at a time. Lane’s first-hand accounts of the lives of Henry Ford, Charlie Chaplin, Jack London, and Herbert Hoover were published in book form.

Lane played a hands-on role during the 1940s and 1950s in launching the “libertarian movement” and began an extensive correspondence with figures such as DuPont executive Jasper Crane and writers Frank Meyer as well as her friend and colleague, Ayn Rand. She wrote book reviews for the National Economic Council and later for the Volker Fund, out of which grew the Institute for Humane Studies. Later, she lectured at, and gave generous financial support to, the Freedom School headed by libertarian Robert LeFevre.

In later years, Lane wrote a book detailing the history of American needlework for Woman’s Day. She edited and published On the Way Home, providing an autobiographical setting around her mother’s original 1894 diary of their six-week journey from South Dakota to Missouri. Intended to serve as the capstone to the Little House series, the book was the result of Wilder’s fans who were writing to Lane asking, “what happened next?” She contributed book reviews to the William Volker Fund, and continued to work on revisions of The Discovery of Freedom, which she never completed.

Rose Wilder Lane died in her sleep at age 81, on October 30, 1968, just as she was about to depart on a three-year world tour. She was buried next to her parents at Mansfield Cemetery in Mansfield, Missouri.