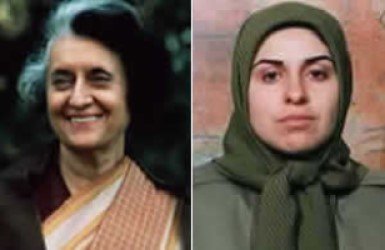 Indira Gandhi was the only child of the first Indian Prime Minister, Jawaharlal Nehru. She served as the Chief of Staff of her father’s highly centralised administration between 1947 and 1964 and came to wield considerable unofficial influence in government. She was elected Congress President in 1959. Upon her father’s death in 1964, Gandhi refused to enter Congress party leadership contest and instead chose to become a cabinet minister in the government led by Lal Bahadur Shastri. In Congress’ party parliamentary leadership election held in early 1966 upon the death of Shastri, she defeated her rival, Morarji Desai, to become leader and thus succeeded Shastri as the prime minister of India.

As the Prime Minister of India, Gandhi was known for her political ruthlessness and unprecedented centralisation of power. She went to war with Pakistan in support of the independence movement and war of independence in East Pakistan, which resulted in an Indian victory and the creation of Bangladesh, as well as increasing India‘s influence to the point where it became the regional hegemon of South Asia. Gandhi also presided over a controversial state of emergency from 1975 to 1977 during which she ruled by decree. She was assassinated in 1984 by her Sikh bodyguards a few months after she ordered the storming of the Harmandir Sahib in Amritsar to counter the Punjab insurgency.

Nasrin Parsian was born in 1960 in Tabriz where she spent her elementary and high school years. She studied Laboratory Sciences in Tabriz University. In the final years of her high school, she became acquainted with supporters of the Mojahedin in Tabriz University and joined the movement after studying the goals of the organization. She actively participated in all the anti-shah demonstrations in Tabriz during the anti-monarchic Revolution that led to the overthrow of the Shah in 1979.

After the revolution, she undertook various responsibilities in northern Iranian province of Gilan and in Tehran. After June 20, 1981, when the clerical regime began its bloody crackdown on the Mojahedin, she left the country with her infant son.

In 1992, she was elected as a member of the leadership council and began the brightest, however short-lived, chapter of her life in which she was involved in the transformation of the organization into a woman-led progressive organization