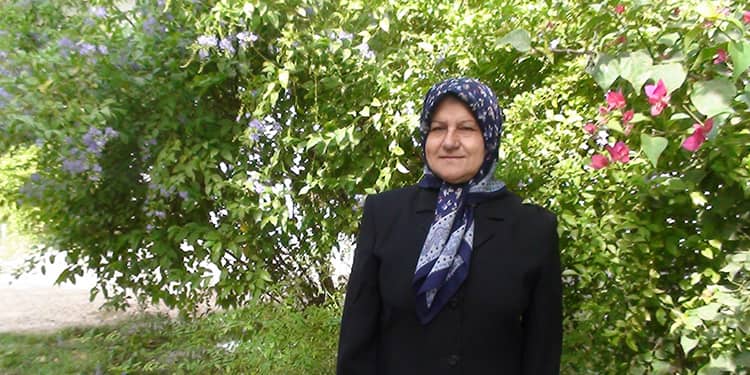 It was in Ashraf city’s Medical center that Maryam Aghar spent countless years taking care of her colleagues with great affection and joy. The well-being of her patients was always her first priority.

Those who know Maryam closely describe her as humble and brave individual. Someone whose kindness and cheerfulness lifted the spirits of those around her.

Maryam was born in 1959 in Masjed Soleiman, the eldest of 3 sisters and 2 brothers.

In 1979, she was introduced to the People’s Mojahedin Organization of Iran (PMOI/MEK) through one of her brothers. As political activity was prevalent among the youth in Iran, Maryam was immediately drawn to the organization and began her political endeavors with them.

Following the escalation of repression, torture and killings by Khomeini’s regime in 1981, Maryam Aghar, who was about to be identified and arrested, decided to leave the country for Canada in April 1982.

Canada presented her with another world, another land and another destiny. A land where she could build the best and most prosperous life for herself; but Maryam was not one to compromise with passivism and silence.

Shortly after arriving in Canada, she once again became active with the association of PMOI supporters. During this time, she was known as a dedicated and hard-working woman.

Maryam Aghar trampled the streets and cities of Canada and then the United States to voice the freedom-seeking resistance going on in Iran. She spared no effort to convey the message of the tortured prisoners and the martyrs appeared in the thick book of the martyrs of the resistance.

For Maryam Aghar, 1993 was the year of committing herself for the full-fledged struggle as she joined the movement in Ashraf – the center of resistance. It was there in Ashraf where she knowingly became part of the Iranian resistance with all its hardship and obstacles ahead; but with a heart full of hope she could overcome all.

After a while, she started working in the Ashraf medical department. For years, according to patients, she was and continues to be one of their most compassionate, empathetic and inspiring members of the organization.

For me, as a nurse, the most beautiful and best moments have been the scenes where my patients or my fellow sisters were recovering from a difficult illness, says Maryam Aghar.

But I have also experienced many difficult moments in fulfilling this heavy responsibility that I have taken on. Among them, seeing the injuries of my sisters, especially during the 14 years of endurance in Ashraf, caused by the brutal attacks of Khamenei’s mercenaries in Iraq.

For example: One of the most difficult and shocking moments for me was April 10, 2011, when a large number of my injured sisters were severely wounded or their limbs dismembered as a result of being shot or thrown a grenade at them. One of them was Elham known her since she was very young in Canada where we used to set up desks and participated in rallies; I loved her like my daughter. I also remember my other sisters; Asieh, Fatemeh, Nastaran and Fa’ezeh, who were martyred instantly as a result of direct shot or, like Saba, who eventually succumbed to her wounds.

The truth is that a nurse never reflects her deep sorrow on her face while on duty; especially if you were being present in the field of a fierce struggle such as the inhuman siege of Ashraf that even you did not have enough medicine or painkillers to relieve suffering patients.

In such circumstances, one should only promote the spirit of hope and stability among those who are witnessing to prevail over all pains.

That day and the days after, I relied on the other staff of Ashraf Clinic to do the same thing, and that was the secret of our victory even with empty hands in the clinic, over our adversaries.

Now let’s convey my best gratitude to my gracious colleagues, devoted and hard-working nurses across Iran. They are trying their best to save the lives of thousands of patients infected with covid-19 without any help or financial support from the government. This level of self-sacrifice among them emanates from their perception of compassion and patriotism. I would like to add some words at the end: we medical staff in Ashraf express our best regards and sympathy to our colleagues in Iran; you as “angels of Iran” are not only tackling this unpredictable virus but also the shadows of death that the ruling regime has spread over our country. This is something that the people and history of Iran will never forget.