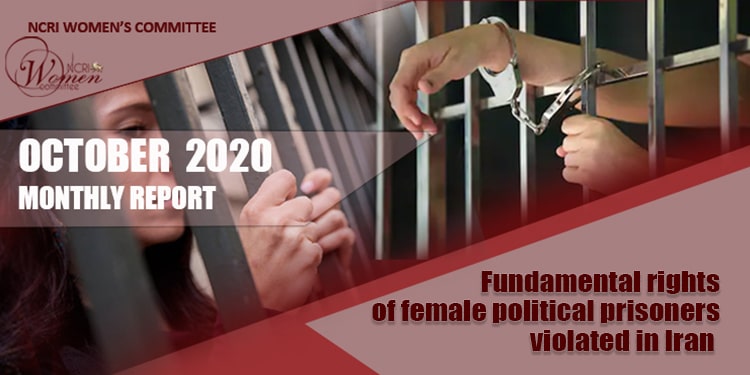 They are the main targets of the clerical regime’s vindictiveness

Besieged by various political, social and economic crises, and in the face of growing public discontent, the clerical regime has no answer but to step up repression.

It has ramped up the number of executions, arrests, humiliating punishments, and more heavy sentences which are unproportionate with the alleged crimes.

So, the clerical regime attempts to put up a show of force to cover up its tremendous instability. To this end, the regime has deployed all the country’s resources not for the fight against the coronavirus but to ratchet up repression.

Political prisoners are the most oppressed among all social sectors and groups. They are handcuffed captives bearing the brunt of the regime’s vindictiveness in any development.

They have been incarcerated just for expressing a different political opinion or for their activities in defense of human rights. In the first place, they should not be in prison.

The mullahs’ regime not only does not release political prisoners even temporarily but they send more and more dissidents to jail every day.

The mullahs have taken advantage of the coronavirus to eliminate their captives.

Prisons do not receive hygienic resources and equipment to protect inmates against the virus. Shortage of water, detergents and disinfectants, shortage of protective equipment like masks and gloves, lack of space for quarantine, and inadequate medical care have all expedited the spread of the Coronavirus in Iran prisons.

Not only there is no separation of prisoner categories in women’s prisons, but even sick prisoners with contagious diseases are held among others.

Following is a brief review of the clerical regime’s inhumane measures in prisons against female political prisoners in Iran in the month of October:

Denial of medical treatment and care

One of the methods commonly used by the clerical regime to torture political prisoners to death is depriving them of medical treatment. There were several cases in the women’s ward of Evin Prison last month. Prisoners with serious illnesses were either deprived of treatment altogether or were sent to hospital but returned before being treated.

She became viciously ill twice over the past month. The second time was on October 17, when prison authorities refused to send her to hospital or even grant her medical leave.

Finally, on October 27 when Fatemeh Mosanna suffered another heavy intestinal bleeding, the authorities agreed to send her to Taleghani Hospital.

There, the doctor said she must be treated under his supervision. But if the treatment did not prove effective, then he had to operate on her.

Despite her critical conditions, prison guards returned her to prison. The order came from the Ministry of Intelligence and the Prosecutor Supervising Political Prisoners.

Ms. Senobari suffers from blurry vision, a broken right leg and other illnesses due to torture during her interrogation. But prison authorities have refused to grant her medical leave to receive treatment.

Relocation of political prisoners from Evin

Another one of the clerical regime’s methods to increase pressure on female political prisoners in Iran is sending them to prisons where they are detained among ordinary prisoners and dangerous criminals.

To this end, at least 7 political prisoners were moved from the women’s ward of Evin to other prisons where separation of categories of prisoners is not observed.

The 62-year-old political prisoner is a lawyer and has four children. She was imprisoned for three years during the 1980s for supporting the People’s Mojahedin Organization of Iran (PMOI/MEK).

Over 200 female prisoners were already detained in the women’s ward of Urmia Prison.

The Qarchak Prison of Varamin and the Central Prison of Urmia are among the worst prisons in Iran plagued with Coronavirus.

Reports from the women’s ward of Evin indicate that after the relocations, the atmosphere of repression in the ward has been stepped up. Prison authorities have reduced the period of telephone calls, saying there are some problems about telephone lines.

The reports also indicate that the relocated prisoners were not given any opportunity to take their hygienic and other essential items with them.

In addition to increasing pressure on female political prisoners in Iran, the relocations are intended to open up some space for new detainees in the upcoming days.

It is also widely believed that prison authorities are planning to close down the women’s ward of Evin. This is the only women’s ward in the country where political prisoners are separated from common inmates.

Harassment and intimidation of political prisoners in Qarchak

Authorities running the notorious Qarchak Prison collected signatures on a letter against political detainees to prevent them from going to the workshop and educating other prisoners.

News came in the last week of October indicating that Mirzaii, the deputy warden of Qarchak, and Asgari, the head of the prison’s workshop, had circulated a letter among ordinary prisoners. The letter said the political prisoners, especially Zahra Safaei, were speaking against the state and discussing political matters when they went to the workshop.

Based on this letter, the prison’s warden closed the door on political prisoners and did not allow them to go to the workshop.

The political prisoners including Zahra Safaei, Parastoo Mo’ini, Forough Taghipour, Maryam Nassiri and Golrokh Iraee expressed their protest against the new restrictions by banging on the door and chanting “death to the dictator.”

Zahra Safaei, her daughter Parastoo Mo’ini, and Forough Taghipour, are imprisoned in Qarchak for supporting the People’s Mojahedin Organization of Iran (PMOI/MEK) and for disseminating propaganda against the state.

They have been repeatedly attacked in this prison by ordinary inmates hired and incited by the warden of Qarchak. The lives of these prisoners are in serious danger.

As in the previous months, the clerical regime continued to make new arrests from among civil and human rights activists.

Motallebzadeh is a photographer by profession and a women’s rights activist who chairs the Association to Defend Freedom of the Press. Ashraf Nafariyeh is a student activist.

The clerical regime has issued new prison sentences for more civil and political activists in October:

Women imprisoned in Kermanshah’s Correctional Center for Rehabilitation held a protest on October 21, 2020. They protested the harsh conditions imposed on prisoners by the head of this prison. Their peaceful protest however was responded by an attack by the Special Guards.

The Special Guards brutalized the prisoners by batons and lobbed tear gas at them. Two female prisoners, Sheno Rahmati and Fatemeh Rahimi, were badly beaten. They were dragged on the ground and taken to solitary confinement.

A number of protesters suffered shortness of breath due to tear gas and pepper spray used by guards.

Several days later, the family of one of the inmates said: “Prison authorities have summoned some of the prisoners and threatened to send them to prisons in remote locations. In addition, sick prisoners have been punished by being deprived of receiving their medicines, and other prisoners face restrictions in making phone calls.”

A recent report from the Prison of Tabriz states that a 60-year-old woman by the name of Shahin Solhjoo has contracted herpes zoster. Tabriz Prison authorities initially transferred Shahin Solhjoo to the dispensary and then to solitary confinement. But since prison guards were afraid of contracting the disease, they sent her back to the general ward after two days.

Inmates objected to the authorities’ failure to hospitalize and treat Ms. Solhjoo. In reaction, prison guards have resorted to yet another inhumane measure, forcing this elderly woman who is in pain, to sleep in the yard in the cold nights of autumn.

Some 150 women detained in the women’s ward of the Prison of Tabriz are exposed to herpes zoster. At least 9 prisoners contracted the COVID-19 in the last week of September 2020.