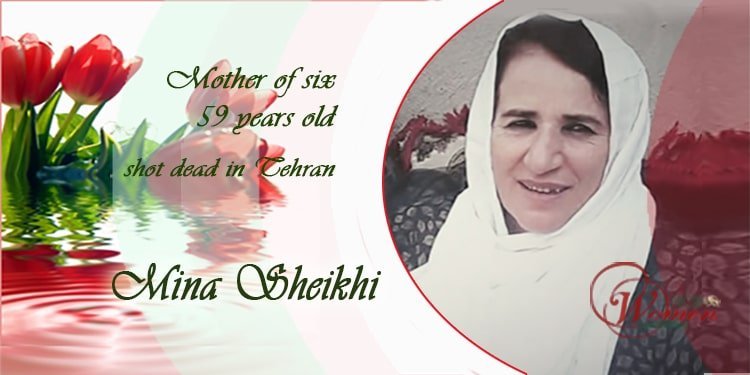 Mina Sheikhi was born on December 22, 1960, in Saqqez. She lost her husband 30 years ago and raised her six children without a father.

On November 16, 2019, when people took to the streets in protest to the fuel price hike, Mina Sheikhi and her neighbors went up to the roof of their four-storey apartment to see what was happening and what caused the shootings.

The defenseless people were being attacked and shot from all sides by security forces and plainclothes agents. Suddenly, three bullets struck Mina in the heart. Her children and relatives quickly took her to the nearby Fayazbakhsh hospital, however, she lost her life before reaching there.

Subsequently, security forces took her corpse from hospital to the coroner’s office at the Behesht Zahar Cemetery in Tehran, without informing her family. Her family finally managed to receive her body on November 19, 2019, after repeated inquiries. The authorities threatened Mrs. Sheikhi’s family that they were not allowed to hold a funeral ceremony for her burial. They were not allowed to put out a funeral advertisement.

At dawn on November 20, as Mina Sheikhi’s family were preparing to bury her beside her brother at the cemetery of Saqqez, agents of the Intelligence Department intervened and despite her family’s protests took her body away to another cemetery called Aychi and buried her there. They warned the family that they were not allowed to talk about this.