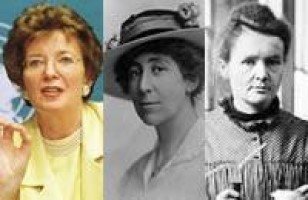 1990 – Mary Robinson, the first woman to be elected President of the Republic of Ireland.

Mary Therese Winifred Bourke was born in Ballina, County Mayo, in 1944. In 1965 she was elected as a Scholar of Trinity College Dublin. An outspoken critic of some Catholic Church teachings, she gave an acceptance speech in 1969 for a law-review position, in which she advocated removing the prohibition of divorce in the Irish Constitution.

She visited Rwanda where she brought world attention to the suffering in that state in the aftermath of its civil war. After her visit, she spoke at a press conference, where she became visibly emotional. As a lawyer trained to be rational, she was furious at her emotion, but it moved many who saw it. By halfway through her term of office her popularity rating reached an unprecedented 93 percent and she became President of Ireland from 1990 to 1997.

Rankin was born on June 11, 1880 near Missoula, Montana. She graduated from high school in 1898, and from the University of Montana in 1902 with a Bachelor of Science degree in biology. She attended the University of Washington and became involved in the women’s suffrage movement. She helped organize the New York Women’s Suffrage Party and worked as a lobbyist for the National American Woman Suffrage Association (NAWSA). In November 1910, Washington voters approved an amendment to their state constitution permanently enfranchising women, the fifth state in the Union to do so.

In February 1911, Rankin became the first woman to speak before the Montana legislature, making her case for women’s suffrage. In November 1914, Montana passed a similar amendment granting women unrestricted voting rights. Rankin later compared her work in the women’s suffrage movement to the pacifist foreign policy that defined her congressional career. She believed, with many suffragists of the period, that the corruption and dysfunction of the United States government was a result of a lack of feminine participation. As she said at a disarmament conference in the interwar period, “The peace problem is a woman’s problem.”

Rankin’s campaign for one of Montana’s two at-large House seats in the congressional election of 1916 won by over 7,500 votes to become the first female member of Congress.

Maria Skłodowska was born in Warsaw, in the Russian partition of Poland, on 7 November 1867. When she was ten years old, Maria began attending the boarding school of J. Sikorska; next she attended a gymnasium for girls, from which she graduated on 12 June 1883 with a gold medal. In late 1891 she left Poland for France. Marie had begun her scientific career in Paris with an investigation of the magnetic properties of various steels, commissioned by The Society for the Encouragement of National Industry. That same year, Pierre Curie entered her life; it was their mutual interest in natural sciences that drew them together. In December 1903, the Royal Swedish Academy of Sciences awarded Pierre Curie, Marie Curie, and Henri Becquerel the Nobel Prize in Physics. On 13 May 1906 the physics department of the University of Paris decided to retain the chair that had been created for Pierre and to offer it to Marie. She accepted it hoping to create a world-class laboratory as a tribute to Pierre. She was the first woman to become a professor at the University of Paris. Curie visited Poland for the last time in early 1934. A few months later, on 4 July 1934, she died at the Sancellemoz Sanatorium in Passy, in Haute-Savoie, from aplastic anemia believed to have been contracted from her long-term exposure to radiation.