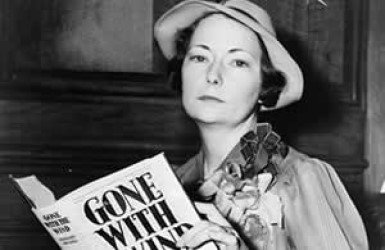 Margaret Mitchell was born in 1900 to a wealthy and politically prominent family.

Her father, Eugene Muse Mitchell, was an attorney, and her mother, Mary Isabel Stephens, was a suffragist. Her Mother kept her daughter’s stories in white enamel bread boxes and several boxes of her stories were stored in the house by the time Margaret went off to college. “Margaret” is a character riding a galloping pony in The Little Pioneers, and plays “Cowboys and Indians” in When We Were Shipwrecked. Romantic love and honor emerged as themes of abiding interest for Mitchell in The Knight and the Lady (ca. 1909), in which a “good knight” and a “bad knight” duel for the hand of the lady. In The Arrow Brave and the Deer Maiden (ca. 1913), a half-white Indian brave, Jack, must withstand the pain inflicted upon him to uphold his honor and win the girl. The same themes were treated with increasing artistry in Lost Laysen, the novella Mitchell wrote as a teenager in 1916, and, with much greater sophistication, in Mitchell’s last known novel, Gone with the Wind, which she began in 1926. Margaret Mitchell was struck by a speeding automobile as she crossed Peachtree Street at 13th Street in Atlanta with her husband, John Marsh, while on her way to see the movie A Canterbury Tale on the evening of August 11, 1949. She died at Grady Hospital five days later without fully regaining consciousness.