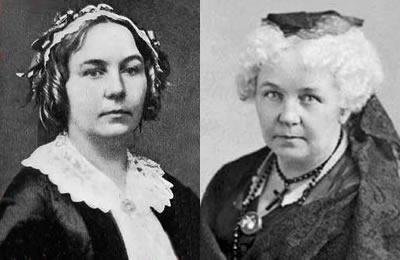 Daniel Cady, Stanton’s father, was a prominent Federalist attorney who served one term in the United States Congress (1814–1817) and later became both a circuit court judge and, in 1847, a New York Supreme Court justice. Judge Cady introduced his daughter to the law. She planted the early seeds that grew into her legal and social activism.

Stanton’s declaration proclaimed that men and women are created equal. She proposed, among other things, a then-controversial resolution demanding voting rights for women. The final resolutions, including female suffrage, were passed, in no small measure, because of the support of Frederick Douglass, who attended and informally spoke at the convention.

Soon after the convention, Stanton was invited to speak at a second women’s rights convention in Rochester, New York, solidifying her role as an activist and reformer.

Stanton pushed for a broader platform of women’s rights in general and was always recognized as a movement leader. She was later joined by others who began assuming leadership positions within the movement. Stanton’s position caused a significant rift between herself and many civil rights leaders, particularly Frederick Douglass, who believed that white women, already empowered by their connection to fathers, husbands, and brothers, at least vicariously had the vote.

In her later years, Stanton became interested in efforts to create cooperative communities and work places. She was also attracted to various forms of political radicalism, applauding the Populist movement and identifying herself with socialism. Stanton maintained a broad focus on women’s rights in general rather than narrowing her focus only to female suffrage in particular. She supported divorce rights, employment rights, and property rights for women.

Stanton died of heart failure at her home in New York City on October 26, 1902, 18 years before women were granted the right to vote in the United States.