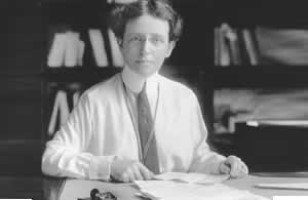 Baker was born in Poughkeepsie, New York, in 1873 to a wealthy Quaker family. At the age of 16, Baker decided on a career in medicine.

After studying chemistry and biology at home, she enrolled in the New York Infirmary Medical College, a medical school for women, founded by the sisters and physicians Elizabeth Blackwell and Emily Blackwell.

Baker and a group of nurses started to train mothers in how to care for their babies. Josephine Baker was becoming famous, so much so that New York University Medical School asked her to lecture there on children’s health, or “child hygiene”, as it was known at the time. Baker said she would if she could also enroll in the School.

She was active in many groups and societies including over twenty-five medical societies and the New York State Department of Health. She also became the President of the American Medical Women’s Association and wrote 250 articles, four books, and her autobiography before her death in 1945.