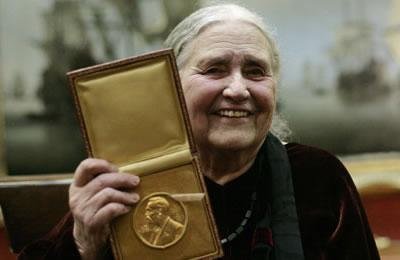 Lessing was born Doris May Tayler on 22 October 1919, in Kermanshah, Iran, where her parents moved for her father to take a job as a clerk for the Imperial Bank of Persia. In 1925, the family moved to the British colony of Southern Rhodesia (now Zimbabwe). She left school at age 14, and studied on her own since then; she left home at 15 and worked as a nursemaid. She started reading books and began writing. In 1943 Lessing’s interest was drawn to the popular community of the Left Book Club, a communist book club which she had joined the year before. As well as campaigning against nuclear arms, she was an active opponent of apartheid which led in 1956 to being banned from South Africa and Rhodesia for many years. In the same year, following the Soviet invasion of Hungary, she left the British Communist Party. Her first novel, The Grass Is Singing, was published in 1950. Her breakthrough work, The Golden Notebook, was written in 1962. By the time of her death, more than 50 of her novels had been published. In 2007, Lessing was awarded the Nobel Prize in Literature. She received the prize at the age of 88 years and 52 days, making her the oldest winner of the literature prize at the time of the award and the third-oldest Nobel laureate in any category. She died on 17 November 2013, aged 94, at her home in London.