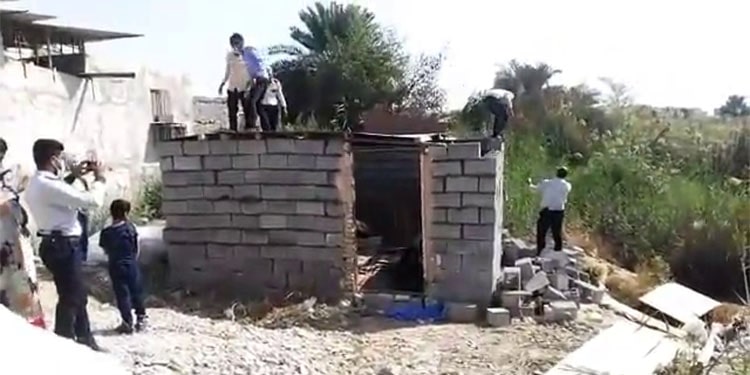 A woman set herself ablaze after state forces razed her home in Bandar Abbas.

Forces of the municipality of Bandar Abbas, capital of Hormozgan Province in southern Iran, razed the shelter of a woman head of household.

The footage of this cruel and inhuman measure was disseminated on the social media on November 19, 2020. One can hear the screams of a young girl and see her mother confronting the agents who demolish her home.

The woman head of household, 35, has several children. She protested the razing of her small room by setting herself on fire.

Esmail Movahhedi Nejad, deputy for civil services in the Municipality of Bandar Abbas, confirmed that the woman set herself ablaze.

He said: “During the razing, she suddenly set herself on fire… She suffered 17 percent burns which is mostly on her left arm” (The state-run hamshahrionline.ir, November 20, 2020).

Hamshahrionline.ir added that three women heads of household and their five children lived in this small room.

Abbas Aminzadeh, the mayor of Bandar Abbas, claimed that “the land had been invaded and according to the law it had to be destroyed” (The state-run ILNA news agency – November 19, 2020)

The measure by agents of the municipality of Bandar Abbas is a reminder of a similar incident in Kermanshah.

In the morning of Tuesday, May 19, 2020, agents of the third municipal district of Kermanshah, raided Fadak Township with loaders and bulldozers. Without giving prior notice to the residents, they razed the little houses of the slum dwellers as they were asleep. Municipal agents brought down the roofs and the people’s furniture and belongings remained under the rubbles.

Asieh Panahi, 58, who stood up to the agents was seriously brutalized. She suffered a fatal heart attack after the agents sprayed her with pepper gas. Asieh Panahi supported her four daughters and three sons. They also beat and bruised Ms. Panahi’s daughter and granddaughter.

In recent weeks, too, the clerical regime’s forces destroyed the houses of residents of Zardoui Village of Paveh (Kermanshah Province), Golshahr district of Chabahar (Sistan and Baluchestan Province), Hajiabad village in Hormozgan, and Ismailabad village in Mashhad (Razavi Khorasan Province). In addition to razing the houses, they attacked and brutalized women and youths.