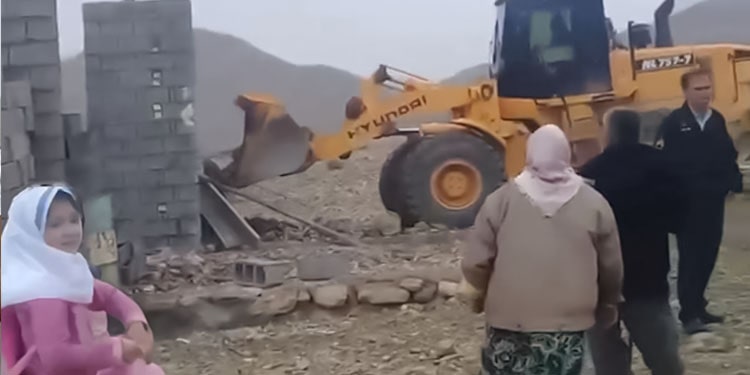 Despite the Coronavirus pandemic, unemployment and financial straits of impoverished people, razing homes of women heads of households had turned into a common practice by municipalities in various parts of Iran.

Agents of the municipality of the city of Fasa razed homes of people in the suburb of this city. Fasa is located in the province of Fars in southern Iran.

The video clip of this inhuman and cruel act was disseminated in the social media on November 21, 2020.

The razed house was 18 years old according to the son of the family who lived there. The father of the family is presently disabled and the mother is running the household. This is not the first time that a woman head of household and her family lose their home.

Razing homes of women heads of households and deprived people has apparently become a common practice for municipality agents in various parts of Iran.

Women heads of households are the first victims of this cruel measure amidst the Coronavirus pandemic.

On November 19, 2020, municipality agents of the port city of Bandar Abbas destroyed the ramshackle house of two women heads of households.

The little room housed Zahra Hassanzadeh, her 7-year-old son, her sister-in-law and her three children.

In an audio clip, Zahra Hassanzadeh explained that she had screamed so much during the attack on their home, that she has almost lost her voice. She said the woman who set herself on fire was Tayyebbeh, her sister-in-law, and now, she has to take care of her nephews as well because their mother is in hospital.

Zahra Hassanzadeh, 45, has two daughters who are married. She used to live in Karaj with her 7-year-old son. Since she could not pay her rent, she moved to her hometown in the suburb of Bandar Abbas. Tayyebeh, her sister-in-law was left alone to take care of her three children, after her addicted husband left them.

The two women heads of household who do not receive any form of support from the government, built the little house for themselves with the help of neighbors who gave them cement blocks.

Zahra Hassanzadeh, her son and her nephews, who have become homeless after the destruction of their house, have taken refuge with a neighbor and live in their yard.

Aminizadeh, the mayor of Bandar Abbas, declared that 43 percent of this port city has run-down buildings and informal residences (The state-run ROKNA news agency – November 21, 2020).