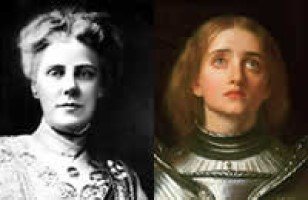 On 23 May 1430, she was captured at Compiegne by the Burgundian faction which was allied with the English. She was later handed over to the English, and then put on trial by the pro-English Bishop of Beauvais Pierre Cauchon on a variety of charges. After Cauchon declared her guilty she was burned at the stake on 30 May 1431, dying at about nineteen years of age.

Joan of Arc has remained a popular figure in literature, painting, sculpture, and other cultural works since the time of her death and many famous writers, filmmakers and composers have created works about her.

Ann Reeves Jarvis was a social activist, founder of Mothers’ Day Work Clubs, and a unifying force within her community during the American Civil War.

On May 10, 1908, three years after her mother’s death, Jarvis held a memorial ceremony to honor her mother and all mothers at Andrews Methodist Episcopal Church, today the International Mother’s Day Shrine, in Grafton, West Virginia, marking the first official observance of Mother’s Day.

Anna Jarvis died on November 24, 1948 and was buried next to her mother, sister, and brother at West Laurel Hill Cemetery, near Philadelphia, in Bala Cynwyd, Pennsylvania.