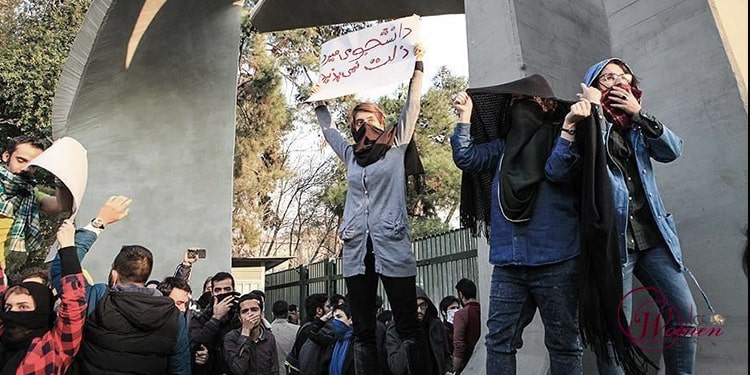 Brave female students, enunciation of a free Iran, and non-discrimination

December 6 marks Student Day in Iran. It is the anniversary of the cold-blooded murder of three defenseless Tehran University students on December 6, 1953, by the Iranian police.

Freedom-loving students in Iran observe Student Day every year to commemorate the students who, throughout the years, have given their lives for Iran’s freedom, as well as the other students who face imprisonment, torture, or other kinds of oppression.

After 1953, freedom-seeking became a lasting tradition not just at Tehran University, but at all Iranian universities and the term “university” was aptly named the “bastion of freedom.” Young university-educated Iranians have always led the Iranian people’s democratic movement.

Under the clerical regime, young women fight to overcome numerous obstacles created under the law and in society to marginalize women and deprive them of education. Nonetheless, over the years, Iranian girls have consistently increased their numbers in education, making up virtually half of university admissions every year. With the same rebellious spirit, brave female students in Iran are at the forefront of all anti-government protests, demanding their democratic rights.

During the nationwide uprisings of December 2017-January 2018 and November 2019, students, as always, demonstrated their decisive role as activists by participating in large-scale protests and chanting “Reformer, Hardliners, the game is over.”

Despite severe repression tactics and control in universities, last January, we also witnessed large-scale protests by Iranian students. The widespread participation and leading role of the brave female students and women in all the demonstrations prompted international media to admit and government officials to confess.

Students commemorate the 1,500 martyrs of the November 2019 uprising

Last year on Student Day, despite the intense security atmosphere, especially in the first days after the nationwide protests in November 2019, Iranian students commemorated the 1,500 martyrs of the November Uprising.

To prevent protests from being formed in Tehran, the mullahs’ regime deployed large numbers of police in front of Tehran University and the surrounding streets, as well as near Amir Kabir University. However, these measures failed to prevent student rallies. Student Day ceremonies were held at several universities in Tehran, Babol, Tabriz, Ahvaz, Mashhad, Isfahan, Najafabad and other cities. All the rallies featured brave female students.

The students chanted slogans such as, “a student dies but does not succumb,” “The people fed up with oppression stand together”, “Prison, gun, or batons will not silence us”, “My martyred brother, we will continue on your path”, “The classroom is empty; the student is in prison” and “Political prisoners must be freed.”

Students rise up again in January 2020

For 3 days, Iran was in a frenzy. People demonstrated in various districts of Tehran and different cities, including Isfahan, Mashhad, Ahvaz, Shadegan, Kermanshah, Sanandaj, Karaj, Sari, Babol, Amol, Semnan, Shahroud, Tabriz, Qazvin, Zanjan, Shiraz, Urmia, Gorgan, Arak, Quds, and Robat Karim. Thousands of students chanted, “Death to the dictator,” and demanded the resignation of Ali Khamenei, the supreme leader of the mullahs’ regime. The brave female students played an active and leading role in these protests. Repressive forces attacked the demonstrators with batons, tear gas, and guns. They brought vehicles equipped with automatic machine guns and water cannons to the streets.

In the days following the protests, the students turned the funerals of the victims into anti-government protests in different parts of the country, including Sanandaj, Shiraz, and Isfahan.

A number of protesters were injured, and a large number of people and students were arrested during the crackdown. Several videos of brave female students being injured during protests in Tehran’s Azadi Square have been published on social media.

The students’ slogans during these 3 days indicated their determination to achieve freedom. They chanted, “1,500 people were killed in November,” “Death to this regime, all these years of crime,” “Khamenei is a murderer, his rule is invalid,” and “the student dies but does not succumb.”

They also stressed in a statement that “this process will continue until the day this land becomes a homeland again.”

The mullahs’ dictatorship, which has based its government on repression, especially the repression of women, has used the same tactics vis-à-vis students demanding freedom and equality. Many brave female students have faced unfair sentences solely for demanding freedom. According to the Student Union Council of the University of Tehran, the number of detainees at this university has reached 40 to 50. Arbitrary detentions of students have continued over the past year.

The names of some of the female students facing unfair sentences are as follows:

After the December 2017-January 2018 and November 2019 uprisings, everywhere in Iran, especially universities, transformed into centers of uprisings. The spread of the Coronavirus became a tool in the hands of the clerical dictatorship: they could prevent the continuation of uprisings on one hand, and produce thousands of deaths on the other, thereby closing protest centers.

A December 1, 2020 article, published on Iran’s student union council’s Telegram channel, stated, “It has been more than 9 months since the university closed due to the Coronavirus outbreak. Since then, 10 students have been arrested and 7 court sentences have been issued against them.”

“Although the closure of the university to prevent the spread of COVID-19 has been disastrous for students, it has been a blessing for university officials. The most important advantage for university officials is for students to lose the right to use the university environment as part of the public space. While officials at the Ministry of Science, a government institution, try to show concerns about students’ health, the fact remains that official and unofficial death tolls and government policies to reduce the number of Coronavirus victims demonstrate the opposite. Is a student’s life dearer to the government than that of workers or employees? Let us respond to the concerns of the officials with a chuckle!”

Statement by women political prisoners in Qarchak Prison on the Demise of Dr. Mohammad Maleki