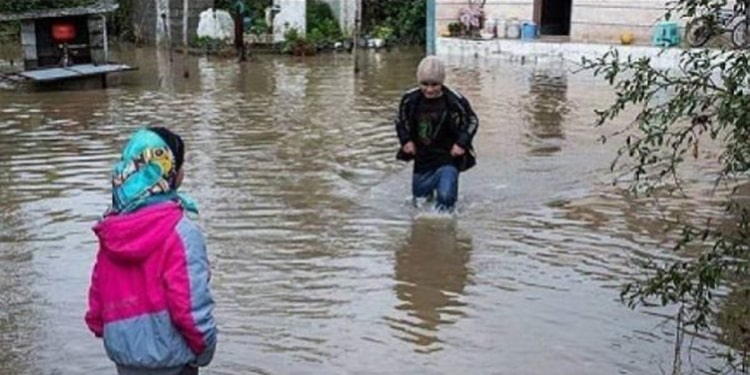 Heavy flash floods devastated 12 Iranian provinces, a product of the clerical regime’s inaction and destruction of the country’s infrastructures.

By December 8, 2020, floods engulfed at least 12 Iranian provinces including Khuzestan, Fars, Isfahan, Yazd, Kerman, Bushehr, Lorestan, Chahar Mahal-o Bakhtiari, Hormozgan, Gilan, and Sistan and Baluchestan, and inflicted heavy damages on the residents. At least 55 million people have been affected by the flash floods.

People’s homes are immersed in water. Women and children have gone on the roofs in the absence of any shelter in the cold of Autumn and amid the pandemic.

The regime’s media have reported only 9 deaths because of the floods. At least 7 lost their lives in Bushehr and Hormozgan provinces. Two women have reportedly drowned in the floods in Bushehr (southern Iran). A large number of people are missing.

Kalkal Bridge is a very important and strategic bridge which has been completely drowned under water, disconnecting the three provinces of Fars, Bushehr and Khuzestan.

The Province of Bushehr has been hardest hit in the floods. 8,000 residential units have been damaged. Two-thirds of the city of Vahdatieh is immersed under water. Most people have taken to their roof tops fearing for their lives.

Fourteen cities in the Province of Fars are engulfed in water. Some are the exact same areas flooded in Spring 2019. More than a year and a half since then, the provincial officials have done nothing to repair the damages and prevent further destructions.

The state-run Ressalat daily on December 8 reported that water and sewage are running in the streets, creating horrible health conditions during the pandemic.