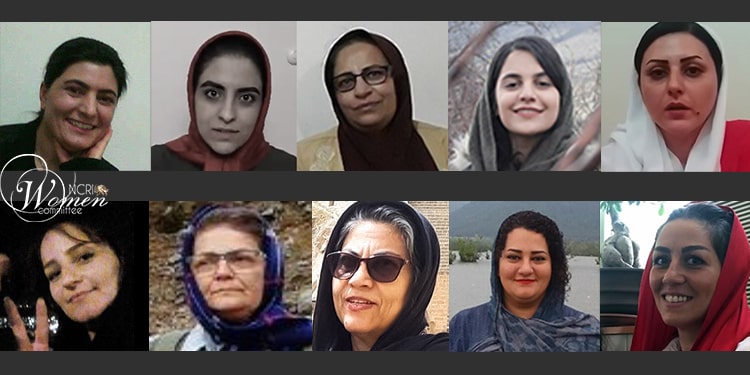 Persecution of human rights defenders and execution of women in Iran

The main forms of violence against women in Iran are carried out by state agents and sponsored by the state. On the final day of 16 days of activism to eliminate violence against women, coinciding with the World Human Rights Day, we will briefly review arbitrary arrests, persecution of human rights defenders, civil rights activists and women political prisoners as well as the execution of women in Iran.

Scores of women defenders are persecuted for their legitimate work.

It was revealed in February that conservationists Niloufar Bayani and Sepideh Kashani had been viciously tortured mentally and physically and sexually harassed. The interrogators tried to compel them to write false confessions against themselves.

Mary Mohammadi, a Christian convert, was arrested during the protests to the IRGC downing of the Ukrainian passenger aircraft in January 2020. She was tortured and sexually and physically harassed during her interrogations. She was forced to take off all her clothes and do squats.

The arrests of human rights lawyers are also part of an attempt by the authorities to prevent them from being able to defend their clients, who are often human rights defenders or individuals who face the death penalty, including for crimes committed as a child.

The arrest and imprisonment of people for their political or religious beliefs is contrary to the international law. Article 18 of the Universal Declaration of Human Rights stipulates: “Everyone has the right to freedom of thought, conscience and religion.”

The clerical regime ruling Iran, however, has numerous agencies to clamp down on the public, each of which acts independently to arrest anyone who opposes the regime. The State Security Force (SSF), the Islamic Revolutionary Guard Corps (IRGC), the paramilitary Bassij, and even the disciplinary committees at the universities are components of a vast network that cracks down on the Iranian people’s freedom of thought, expression and gathering.

These agencies arrest women in public or at home, often without presenting legal warrants and by use of brute force and violence.

The regime made a wave of arrests of civil rights activists over the past year, despite the pandemic plaguing Iranian prisons, despite lack of minimum hygienic equipment and detergents.

Farangis Mazloum spent time in solitary confinement and under torture for defending her son, political prisoners Soheil Arabi. The Revolutionary Court of Tehran initially sentenced her to six years in prison but later commuted her sentence to 18 months in prison.

Political prisoners and prisoners of conscience and many ordinary prisoners in Iran are deprived of due process of law and do not have access to justice. Judicial proceedings do not conform to the regime’s own laws, let alone international laws.

The prisoner is confined to a solitary cell after being arrested to be forced under pressure and torture to make confessions against herself. During this period, the prisoner has no contact with the outside world to inform her family of her arrest and place of detention. Under such circumstances, it is totally impossible for the prisoner to have a defense attorney.

On numerous occasions, prisoners have resorted to hunger strike as a last resort and refused food and endangered their health in order to reach their rightful demands.

Political prisoners and detained civil activists are systematically brutalized and mistreated to be forced into making false confessions, cooperating with the regime, or giving their information. When they do not succeed in doing so, they deprive them of medical treatment to bring about their gradual death or hire common criminals to kill them in prison.

The NCRI Women’s Committee and the Iranian Resistance issued several statements over the past year, warning for the lives of political prisoners detained in Qarchak Prison.

Political prisoner Zahra Safaei was threatened on June 3, 2020 by several inmates hired by the Ministry of Intelligence. They threatened to attack and kill Ms. Safaei.

Then in August, there was another report that two inmates attacked Zahra Safaei, on August 27, 2020, by hitting them in the face and head. They only stopped when other prisoners mediated and stopped them. Zahra Safaei later complained to the Qarchak Prison authorities, saying: “We do not have any security here. We do not feel secure at nights in the room and not even when we intend to go to the bathroom.”

In the last week of October, Qarchak Prison authorities conspired against political prisoners to prevent them from going to the workshop and educating other inmates. They locked the door on them, which caused their protest. The political prisoners including Zahra Safaei, Parastoo Mo’ini, Forough Taghipour, Maryam Nassiri and Golrokh Iraee expressed their protest against the new restrictions by banging on the door and chanting “death to the dictator.”

Zahra Safaei, her daughter Parastoo Mo’ini, and Forough Taghipour, are imprisoned in Qarchak for supporting the People’s Mojahedin Organization of Iran (PMOI/MEK) and for disseminating propaganda against the state. They have been repeatedly attacked in this prison by ordinary inmates hired and incited by the warden of Qarchak. The lives of these prisoners are in serious danger.

Political prisoner Golrokh Ibrahimi Iraee is incarcerated in Qarchak Prison of Varamin. She is deprived of having visits with her imprisoned husband, political prisoner Arash Sadeghi who suffers from cancer. Based on a new case filed against her, Golrokh Iraee has been imprisoned to serve her sentence of 3 years and 7 months. She has been summoned by the IRGC Intelligence to Ward 2A of Evin Prison to undergo interrogations.

Sentenced to life in prison, Zeinab Jalalian is serving her 13th year in prison. She suffers from various illnesses, including asthma, pterygium, an oral thrush condition, and GI complications. She was transferred four times between prisons within six months this year. She is presently deprived of all her rights as a prisoner, and in under pressure to express remorse and cooperate with the Intelligence Ministry.

Political prisoner Fatemeh Mosanna is sentenced to 15 years in prison because she held a memorial ceremony for her deceased father-in-law who was a member of the opposition PMOI/MEK.

She has been suffering from intestinal infection and hemorrhage. The clinic of Evin Prison announced that they were not able to do anything for her treatment. But prison authorities refused to send her to hospital or even grant her medical leave. Finally, on August 19, she was transferred out to Tehran’s Taleghani Hospital where her limbs were cuffed to the bed throughout her stay. Fatemeh Mosanna was returned to prison despite opposition of her doctor, without completing her tests and completing her treatment.

She was detained in the quarantine cell despite her critical health conditions. She suffered from GI problems including diarrhea and vomiting, and she could not eat anything.

Then on October 27 when Fatemeh Mosanna suffered another heavy intestinal bleeding, the authorities agreed to send her to Taleghani Hospital. But again, returned her to prison without receiving treatment.

Political prisoner Massoumeh Senobari is sentenced to a total of eight years in prison, one year for “propaganda against the state,” 5 years for “membership in the People’s Mojahedin,” and 2 years for “insulting Khamenei.” She is being detained among ordinary prisoners in the women’s ward of Tabriz Prison and is under great pressure. She contracted the COVID-19. Ms. Senobari suffers from blurry vision, a broken right leg and other illnesses due to torture during her interrogation. But prison authorities have refused to grant her medical leave to receive treatment. Born in 1988, Ms. Senobari has one child and lives in Tabriz, capital of East Azerbaijan Province in northwestern Iran.

In the women’s ward of Sepidar Prison of Ahvaz, political prisoner Nejat Anvar Hamidi suffers from poor eyesight, thyroid complications and chronic headaches. In addition, she has contracted the coronavirus.

Retired activist teacher, Nahid Fat’halian, remains in undetermined status in Evin Prison since her arrest on April 14, 2020. She actively assisted flood victims by taking them aid packages in spring 2019.

Zahra Jamali is presently serving her sentence of 3 years and six months in the Women’s Ward of Evin Prison. She has an ovarian cyst and a tumor in the sole of her foot and is experiencing a lot of pain but prison authorities refuse to send her to any medical center. The only reason for imprisonment of Ms. Jamali is that she made a speech during the funeral ceremony of political prisoner Alireza Shir Mohammadi, murdered by inmates incited by the authorities of the Greater Tehran Penitentiary.

The regime’s Judiciary fabricates cases against resistant political prisoners as a systematic practice to extend their prison terms and increase pressure on them.

Maryam Akbari Monfared is sentenced to 15 years in prison for contacting her siblings who are members of the opposition PMOI/MEK. She has served 11 years of her sentences without being granted a single day of leave.

Atena Daemi, a children’s rights activist, was about to complete serving her sentence, when she was sentenced to another 3 years and 7 months after a new case fabricated against her. Then in yet another trumped up case by the Intelligence Ministry (MOIS) and the Revolutionary Guard Corps (IRGC), Atena Daemi was condemned, for the third time in a row, to an additional sentence of two years’ imprisonment and 74 lashes. Her prison sentence has thus reached a total of 10 years.

Execution of women in Iran

Iran is the only country in the world that executes so many women. 109 women have been executed during Rouhani’s tenure since August 2013.

Most of the women executed are themselves victims of domestic violence and discriminatory family laws. Many act in self-defense against mistreatment by their husbands and a system that miserably fails to protect them.

The death sentences are issued at the end of unfair, closed-door trials coupled with torture to force prisoners into making confessions.

In a letter published on July 27, 2019, political prisoner Golrokh Ebrahimi Iraee, addressed the issue of women convicted of murder and sentenced to death:

“In meeting women convicted of murder, I learned that a large percentage of them had murdered their husbands —instantly or based on a pre-meditated plan—after years of being humiliated, insulted, battered and even tortured by them and because of being deprived of their right to divorce. Although, they consider themselves criminals but are convinced that if any of their repeated appeals for divorce had been granted, they would not have committed such a crime.”