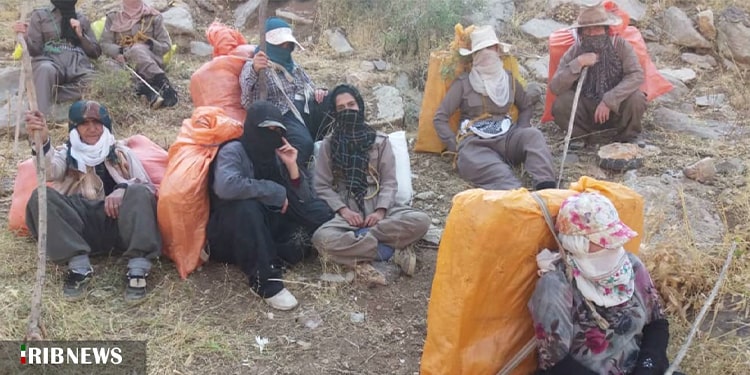 Working as a porter has turned into a job for the poor people living in the border regions of Iran who have no other way of earning their livelihood.

The regime does not recognize this as a job and its security forces and border patrols shoot at porters. Every year, dozens of porters die and many more get wounded and disabled as a result of such shootings.

If porters escape being shot by the revolutionary guards (IRGC) and the State Security Force (SSF), they will not escape becoming disabled after a short time because of carrying hefty loads through mountainous terrains and dangerous paths.

The strongest porters cannot work more than two years. Their knees and backbone get damaged and they have to stay home.

Working as a porter has turned into a family job

Poverty, unemployment, having no prospect of future, the empty stomachs of their children, the wounded bodies of their husbands, are among the reasons women turn to this difficult job to earn a living.

Most female porters in Iran are alone. Their husbands have either become disabled or died.

Gelareh is a female porter who works in Uraman, in the Iranian Kurdistan and Kermanshah Provinces.

After her husband was shot by security forces and lost his leg, she had to start working as a porter, herself.

Most women who work as a porter do so without telling anyone. They wear men’s clothes. These women take strong tranquilizers to be able to carry heavy loads and pass through difficult mountainous paths. They do not talk to anyone lest people find out that they are women.

The women of Jalaneh, in Uraman, say that every day some 12,000 male porters go to work. They walk for between 8 to 12 hours. But there is no statistics on female porters.

Women carry lighter weights because physically, they are not able to carry heavier loads. So, they earn less money. On the average, every male porter can carry 50 kilograms. But female porters can carry between 15 to 20 kilograms. They earn between 150 to 200 thousand Tomans (around $7) despite endangering their health and lives.