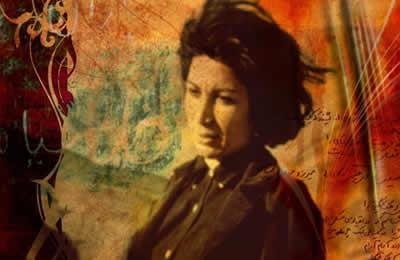 1934- Forugh Farrokhzad one of Iran’s most influential female poets of the 20th century.

Forugh was born in Tehran to career military officer in January 5, 1935.

She published two volumes, The Wall and The Rebellion before traveling to Tabriz to make a film about Iranians affected by leprosy. This 1962 documentary film titled The House is Black won several international awards.

In 1964 she published Another Birth. Her poetry was now mature and sophisticated, and a profound change from previous modern Iranian poetic conventions.

On February 13, 1967, Farrokhzad died in a car accident at the age of 32. She was one of the best-structured modern poets of Iran.

1895–Urani Rumbo (1895-1936) was an Albanian feminist, teacher and playwright. She founded various associations promoting Albanian women‘s rights, the most important of which was the Lidhja e Gruas (English: Woman’s Union), one of the first prominent feminist organizations of Albania.

Urani Rumbo was born in December 1895 in Stegopul, a village near Gjirokastër in southern Albania. In the period of the democratic movement in Albania from 1921 to 1924, Rumbo published in local newspapers Demokratia and Drita articles on problems faced by Albanian women, especially the issue of education. On July 25, 1924, Rumbo founded the feminist organization Përmirësimi “Improvement”. Përmirësimi organized educational courses for women of different social stati. On July 4, 1930, she was accused by the authorities of encouraging girl students of the Koto Hoxhi school to perform in theater plays. She responded with an article in the newspaper Demokratia denouncing the accusations as absurd. Although she was supported by public opinion across Albania, the ministry of education transferred her to Vlorë, where she worked until her death on March 26, 1936.