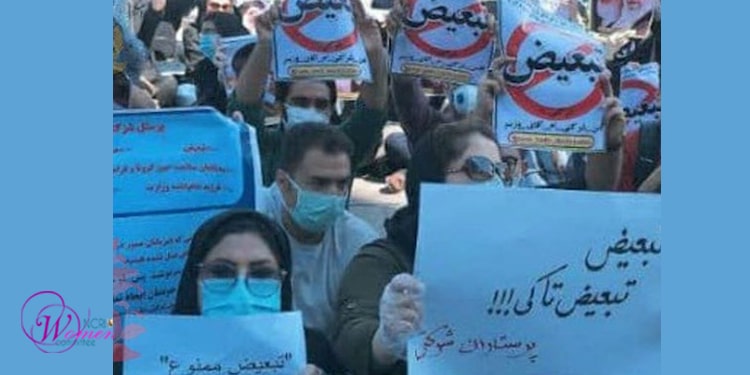 The clerical regime exploits nurses and healthcare workers. In return for their sacrifices and hard work in the frontline of the fight against the Coronavirus, it does not pay their salaries and benefits or fires them.

Protests by nurses and healthcare worker in Khuzestan

A group of nurses working in the medical centers and hospitals of Ahvaz and other nearby cities, held a protest outside the Governorate of Khuzestan. Their protest on Monday, January 5, 2021, was against unjustified discrimination against them, failure to pay them salaries equal to officially hired nurses, lack of job security, etc. They demand that the Governorate and the Medical Sciences University of Khuzestan follow up on their grievances.

The nurses participating in this protest said: “They have deducted from our salaries and benefits for consecutive months. We have been going through difficult circumstances over the past year because of the Coronavirus outbreak.”

The state-run ILNA news agency reported on the same day that nurses hired by Ava Salamat company in Ahvaz protested lack of attendance to their demands by holding a gathering outside the building of the Governorate of Khuzestan.

ILNA also reported on January 3, 2021, that a group of nurses working in some of the hospitals of Khuzestan had been fired from their jobs without paying their salaries and wages.

Protests of nurses and healthcare workers in Karaj, Yazd, Yasuj and Bafgh

Nurses and healthcare workers of the Hospital of Karaj held a gathering outside the Governorate of Alborz Province to protest non-payment of their wages on Monday, January 5. They chanted, “Enough with hollow promises, our food baskets are empty.”

It is noteworthy that the staff of the Hospital of Karaj have not receive their salaries and benefits for four years.

On Sunday, January 4, 2021, the nurses and healthcare workers hired by private companies in Yazd also held a gathering outside the Governorate of Yazd. They said: “We worked along with the official healthcare workers. But at the time of payment of salaries and benefits, we receive less than they do, because we are contract workers and we do not have the right to object.”

Also a group of forces of the medical center of Bafgh who are hired by private companies held a protest outside the Governorate Building in this city on January 4, 2021.

These individuals demanded their benefits. They said that they had worked as much as the staff who are officially employed, but they do not enjoy the least rights.”

On the other hand, volunteer nurses in Yasuj, capital of Kohgiluyeh and Boyer Ahmad Province, also held a protest outside the Governorate Building on January 3, 2021. These nurses have been fighting the Coronavirus since the beginning of the outbreak. Now, the Medical Sciences University of Yasuj is not going to employ them. They held placards which read: “Sacrifice must not be answered by unemployment,” and “we defeated the virus but were fired from our jobs.”

Protests by nurses and employees hired by companies in Shiraz

The nurses and employees of the Medical Center of Shiraz hired by private companies held a protest outside the provincial governorate in this city. They held hand-written sheets which said: “We helped you in the worst conditions; you abandon us in the worst circumstances. We demand our rights.”

Earlier, onJanuary 1, 2021, a group of nurses and staff of Kowsar Hospital of Shiraz held a protest gathering in the courtyard of this medical center demanding their unpaid salaries. Their placards read: “Pay our salaries” and “we protest.”

More than 80 percent of nurses in Iran are women. According to Mirzabeigi, the general director of the Nursing System Organization, at least 60,000 out of 145,000 nurses in Iran have contracted the coronavirus. 6,000 have been quarantined and at least 100 have lost their lives. (The official IRNA news agency – December 17, 2021)