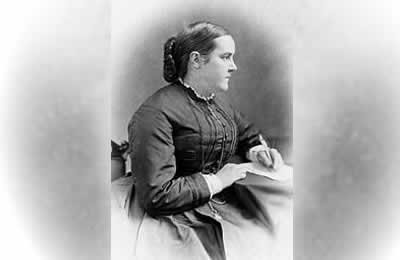 She led the campaign to secure women’s access to university education when she and six other women, collectively known as the Edinburgh Seven, began studying medicine at the University of Edinburgh in 1869. She was the first practicing female doctor in Scotland; a leading campaigner for medical education for women and was involved in founding two medical schools for women, in London (at a time when no other medical schools were training women).

She attended various private schools in southern England and in 1858 enrolled at Queen’s College, London, despite her parents’ objections.

Sophia Jex-Blake travelled to the United States to learn more about women’s education. This was a turning point for Jex-Blake as she realized, during this visit, that to become a doctor was her life’s vocation.

She applied to study medicine in March 1869 but the University Court rejected her application on the grounds that the University could not make the necessary arrangements ‘in the interest of one lady’.

She then advertised in The Scotsman and other national newspapers for more women to join her. A second application was submitted in the summer of 1869 on behalf of the group of five women initially (with two more joined later in the year to make The Edinburgh Seven).

As the women began to demonstrate that they could compete on equal terms in open competition with the male students, hostility towards them began to grow. They received obscene letters, were followed home, had fireworks attached to their front door, mud thrown at them. This culminated in the Surgeons’ Hall riot on the 4th November 1870 when the women arrived to sit an anatomy exam at Surgeons’ Hall and an angry mob of over two hundred were gathered outside throwing mud, rubbish and insults at the women.

The events made national headlines and won the women many new supporters. However, influential members of the Medical faculty eventually persuaded the University to refuse graduation to the women and the campaign in Edinburgh failed in 1873.

Women were eventually admitted onto degree programs at other British Universities in 1877 and Dr. Sophia Jex-Blake had made the greatest contribution to this end.

In 1874, Sophia Jex-Blake helped establish the London School of Medicine for Women but also continued campaigning and studying. Soon came the UK Medical Act of 1876 which allowed all British medical authorities to license all qualified applicants whatever their gender.

Jex-Blake passed the medical exams at the University of Berne where she was awarded an MD in January 1877. Four months later she had further success and was registered with the General Medical Council, the third registered woman doctor in the country.

In 1878, Jex-Blake opened an outpatient clinic at 73 Grove Street, Fountainbridge where poor women could receive medical attention for a fee of a few pence. In 1886 set up the Edinburgh School of Medicine for Women.

Jex-Blake died at Windydene on January 7, 1912, and is buried at Rotherfield.