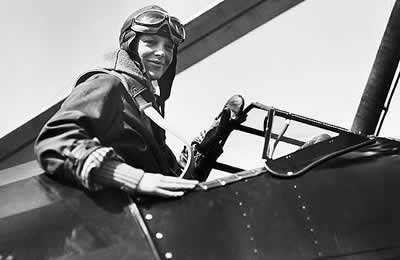 1935 – Amelia Earhart becomes the first pilot to fly solo from Hawaii to California.

On December 28, 1920, Earhart and her father visited an airfield in Long Beach where she had a ride that changed her life. After that 10-minute flight, she became determined to learn to fly.

On May 15, 1923, she became the 16th woman to be issued a pilot’s license by the Fédération Aéronautique Internationale (FAI).

In August 1928, Earhart became the first woman to fly solo across the North American continent and back.

Between 1930 and 1935, Earhart had set seven women’s speed and distance aviation records in a variety of aircraft.

On May 20, 1932, after a flight lasting 14 hours, 56 minutes during which she contended with strong northerly winds, icy conditions and mechanical problems, Earhart landed in a pasture north of Derry, Northern Ireland and became the first woman to fly solo nonstop across the Atlantic.

On January 11, 1935, Earhart became the first pilot to fly solo from Honolulu, Hawaii to Oakland, California.

When she was nearly 40, Earhart wanted to be the first woman to fly around the world. She began the 29,000 mile flight in Miami on June 1, 1937. On July 2, she was nearly at the end of her journey, when she and her plane disappeared near Howland Island in the Pacific Ocean.

Earhart was a widely known international celebrity during her lifetime. Her shyly charismatic appeal, independence, persistence, coolness under pressure, courage and goal-oriented career along with the circumstances of her disappearance at a comparatively early age have driven her lasting fame in popular culture. Hundreds of articles and scores of books have been written about her life which is often cited as a motivational tale, especially for girls. Earhart is generally regarded as a feminist icon.