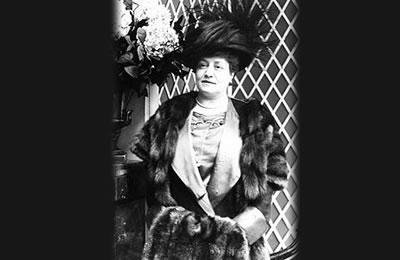 Born into a middle-class family, Marguerite Durand studied at a Roman Catholic convent. After finishing her primary education, she entered the Conservatoire de Paris before joining the Comédie Française.

In 1888, she gave up her career in the theatre to marry an up-and-coming young lawyer, Georges Laguerre. A friend and follower of the politically ambitious army general Georges Boulanger, her husband introduced her to the world of radical populist politics and involved her in writing pamphlets for the “Boulangists” movement. However, the marriage was short-lived and in 1891 the couple separated after which Durand took a job writing for Le Figaro, the leading newspaper of the day. In 1896, the paper sent her to cover the Congrès Féministe International (International Feminist Congress) ostensibly to write a humorous article. She came away from the event a greatly changed person, so much so that the following year on December 9, 1897 she founded a feminist daily newspaper, La Fronde to pick up where Hubertine Auclert’s La Citoyenne left off.

Durand’s newspaper, run exclusively by women, advocated for women’s rights, including admission to the Bar association and the École des Beaux-Arts. As well, its editorials demanded women be allowed to be named to the Legion of Honor and to participate in parliamentary debates. This included, later in 1910, Durand’s attempt to organize female candidates for the legislative elections. At the 1900 World’s Fair in Paris, she organized the Congress For The Rights of Women. As well as establishing a summer residence for female journalists, Oise|Pierrefonds]] in the Picardy region, Durand turned to activism for working women, helping to organize several trade unions.

Her activism raised the profile of feminism in France and Europe to an unprecedented level of respectability. Along the way, she compiled an enormous collection of papers that she gave to the government in 1931. The following year, the Bibliothèque Marguerite Durand opened in Paris and remains to this day one of the best sources in the world for research into feminism and women’s history.