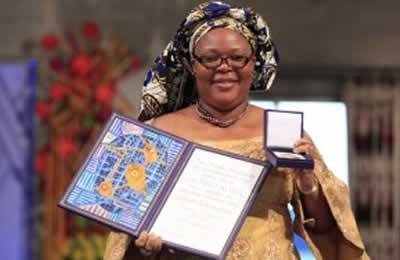 Leymah Roberta Gbowee (born 1 February 1972) is a Liberian peace activist responsible for leading a women’s peace movement, Women of Liberia Mass Action for Peace that helped bring an end to the Second Liberian Civil War in 2003.

She was awarded the 2011 Nobel Peace Prize “for their non-violent struggle for the safety of women and for women’s rights to full participation in peace-building work.”

Gbowee and her allies, including a Mandingo-Muslim woman, began by “going to the mosques on Friday, to the markets on Saturday morning, to two churches every Sunday.” Their flyers read: “We are tired! We are tired of our children being killed! We are tired of being raped! Women, wake up – you have a voice in the peace process!” They also handed out simple drawings explaining their purpose to the many women who couldn’t read.