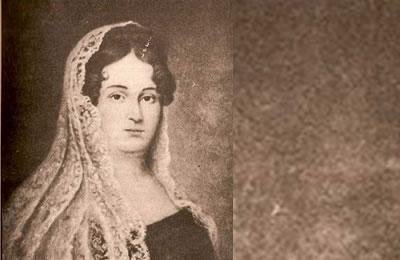 was a member of one of the most aristocratic Chilean families, who actively participated in the Chilean War of Independence. Together with her brothers, they were some of most important leaders of the early Chilean struggle for independence during the period known as the Patria Vieja (“Old Republic”). She is credited with having sewn the first national flag of Chile and is considered to be the “Mother of Chile”.

From her youth, she was well known because of her beauty and strong character. Due to all of her activities, she became the visible face and heroine of early struggles.

After the Spanish Reconquista of 1814, she went into exile, together with her brothers, to Argentina. She escaped and took refuge in a Brazilian ship. There she received the news of the executions of her brothers in 1818.

She lived the rest of her life very quietly in her hacienda of El Monte, where she died in August 1862.

Naomi Bowman Talbert Anderson (March 1, 1863) was a black suffragist who advocated for equal rights for all genders and races in the 1870s.

Anderson was born to free black parents. Her mother cared about her education, and when she was unable to attend the all-white schools in town, she hired private tutors. Her mother died in 1860, and Anderson’s father did not place the same emphasis on education, keeping her from attending college.

Anderson volunteered with the International Organization of Grand Templars and later the Women’s Christian Temperance Union to promote temperance. Soon, she began speaking about women’s suffrage, beginning at the first Woman’s Rights Convention in 1869.

In 1892, she worked alongside white suffragists to campaign for one of the nation’s first state woman suffrage referendums.