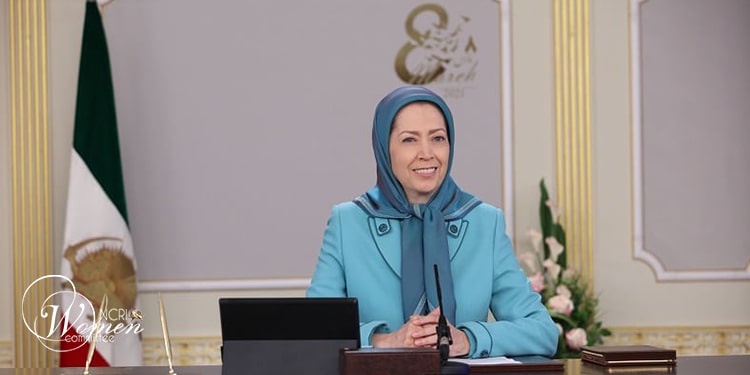 Iranian women’s commitment is to secure victory amid disease.

Mrs. Maryam Rajavi, the President-elect of the National Council of Resistance of Iran, participated in and addressed a virtual conference in the UK on March 8, 2021, International Women’s Day.

In her speech to the UK virtual conference, she urged all advocates of gender equality to support the arisen women of Iran in their quest for freedom and gender parity.

The NCRI President-elect reiterated in her speech: Women’s struggle and sacrifice have been and are the foundations of progress and the guarantee for democracy in our world. And henceforth, a world without injustice, oppression, fundamentalism, and poverty hinges on women’s struggle.

Noting the recent uprisings and protests in Iran, she underlined Iranian women’s commitment this year:

Within Iran, the people are extremely dissatisfied… The people of Iran yearn for freedom, democracy, and justice.

The Iranian people are deprived of the most basic necessities, such as water, bread, hygiene, and healthcare.

Nevertheless, the mullahs are working to build nuclear weapons and ballistic missiles and continue their criminal meddling in the Middle East.

Our sisters across Iran are the primary victims of COVID-19 because of intolerable economic and familial pressures. However, they also have the greatest motivation to foment uprisings to overthrow the religious dictatorship.

So, this year, International Women’s Day carries a commitment for Iranian women: Namely, that we can, and we must secure the victory of freedom and equality amid disease, oppression, and poverty….

The misogynous regime wants to preserve its rule through repression. However, Iranian women play critical roles in challenging the regime and pushing the situation towards overthrowing the mullahs.

This is because women have tolerated the most oppression and suppression at the hands of this regime. As a result, they have greater motivation to end this regime.

In five nationwide uprisings in the past two years, Iranian women have demonstrated remarkable heroism and their qualifications in setting up Resistance Units and enjoying the pivotal role in the organized resistance movement.

Iranian women have put the responsibility to end the catastrophe caused by the ruling theocracy on their shoulders and are prepared to make it happen.

We want to realize a genuine democracy in which women’s active and equal participation in political leadership is imperative.

In tomorrow’s Iran, all women’s individual rights will be recognized, including the freedom of belief, religion, employment, and travel. Women are free to choose their attire.

Women are completely free in choosing their husbands and in marriage. Any form of compulsion against women in the family will be banned. Women’s equal rights to divorce will be recognized.

Physical, sexual, and psychological violence against women in the workplace, educational centers, household, or anywhere else will be considered a crime.

Any sexual exploitation of women under any pretext will be prohibited.

The mullahs’ Sharia laws will have no place in tomorrow’s Iran.

All international covenants on the rights and freedom of women, including the Convention to Eliminate all Forms of Discrimination against Women,” will be at the front and center of civil laws.

The trampling of women’s rights is the most flagrant aspect of the elimination of the human rights of the Iranian people by the ruling mullahs.

Thus, all those concerned about the threats posed by this regime to the international community must support Iranian women’s resistance.

Call on advocates of women’s and human rights

Efforts to contain and control the regime’s nuclear program will not succeed unless they are coupled with firmness against violations of the human rights of the people of Iran.

Call on your governments to make economic and political ties with the criminal mullah regime conditional upon respect for human rights in Iran, especially women and prisoners’ rights.

There is a long line of women who are resisting in prisons across Iran. And although there is not much talk about them but they are among the most resistant fighters for human rights.

In the name of the equality movement, I urge all advocates of gender equality across the world to support the arisen women of Iran and the Iranian people’s uprising for freedom.