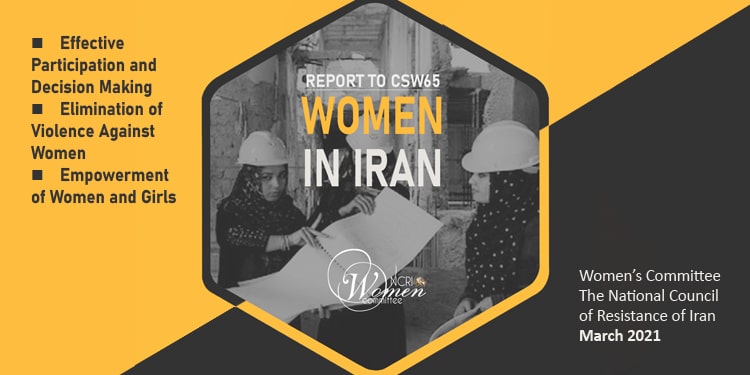 This subject would be assessed in Iran under the rule of the current regime, knowing that the ruling religious fascism in Iran, since its inception, was founded on misogyny, marginalizing women, and turning Iranian women into second-class citizens.

In the past 40 years, the Iranian regime, in law and in practice, has imposed extreme suppression on Iranian women.

In January 2021, according to Transparency International report, in regards to widespread corruption, Iran was ranked 146th out of 180 countries in the world. The widespread corruption leads to more poverty, and in this case due to discriminating rules and policies women are again its first victims.

The annual report on the gender gap of the World Economic Forum ranked Iran 148th out of 153 countries in the world. According to this report Congo, Syria, Pakistan, Iraq, and Yemen are the only countries that have a deeper gender gap than Iran.

Considering the Iranian women’s high spirit of courage and resistance and the high percentage of women among university students and graduates, it is only natural that they face more frustration and pressure given their current situation.

Considering the extent of governmental corruption, and the lack of transparency in governmental reports, the reality is certainly worse.

In addition, it is important to point out that the inhuman management policies of the Iranian regime to fight the Coronavirus have resulted in a situation that 70% of the people unemployed are women workers. This is another factor that contributed to the decline of women in these fields.