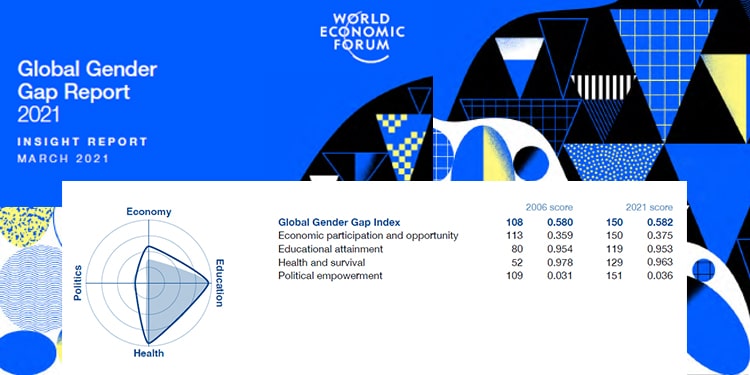 A whopping gender gap in Iran and a lack of women’s access to equal opportunities.

The World Economic Forum’s Global Gender Gap Report 2021 was published on March 31. According to this report, Iran under the clerical regime is ranked 150 among 156 countries with an index of 0.582.

The clerical regime in Iran scores 0.375 on Economic Participation and Opportunity, and a minuscule 0.036 on Political Empowerment of women.

It should be noted that the World Economic Forum’s ranking is based on official statistics of countries and due to the non-transparency of the mullahs’ regime in publishing real statistics, even this category does not reflect the real situation of women in Iran and their deprivation of equal opportunities and participation.

The Global Report 2021 put Iran among “the countries with the largest economic gender gaps.”

According to the GGGR2021, the average participation rate is 31% among the countries in the Middle East and North Africa group, “but seven of the 19 countries (Egypt, Algeria, Iran, Jordan, Syria, Iraq and Yemen) in the region have 20% or less of women participating in the labour market, the lowest in the world.”

The GGGR2021 continues to point out in another part, “Another important factor that limits economic opportunities of women in the region is lack of access to financial assets, including bank accounts. Combined with low presence in the workplace, this drives stark income differences between men and women.” The report puts Iran among the world’s 10 lowest-ranked countries in terms of income gender gaps, with Iranian woman’s income being only 18% of that of a man.

Again, Iran is among countries with the lowest participation of women in parliament with 5.6%.

Iranian women face a male labor market that poses many legal and structural barriers to their employment.

The regime’s policy is to marginalize women. In 2013, Supreme Leader Ali Khamenei described the most important role of a woman to be housekeeping and the greatest struggle of women to be “having children”. (Khamenei website – May 1, 2013, and the state-run Ressalat newspaper – May 2, 2013)

Until last year, only 3 million out of 27 million women labor force was employed, and the female participation rate was below 15 percent. And in terms of income, women earn about one-fifth of men.

65% of unemployed women have higher education and the unemployment rate of educated women in most parts of the country is 3 to 4 times higher than men.

In Iran, 80% of uninsured employees in 2017 were women, often in informal occupations. In fact, the majority of people who cannot benefit from sick pay compensation in the event of the Covid-19 contraction are women. (The state-run ILNA News Agency – April 5, 2020)

Gender Gap in Iran: 70% of those laid off during the Coronavirus crisis are women

Following the outbreak of the Coronavirus in Iran under a corrupt, predatory regime, the people became increasingly poor. In an already bankrupt economy, few remaining production units were shut down and workers laid off.

Meanwhile, women make up the majority of those who lost their jobs in the Coronavirus crisis.

According to the quarterly report of the Statistics Center of Iran, by the summer of 2020, women make up 70% of those who became unemployed due to the Covid- 19 crisis.

Issa Mansouri, Deputy Minister of Cooperatives, Labor, and Social Welfare, acknowledged that women are the main victims of the unemployment crisis in Iran ruled by mullahs. (The state-run Contemporary Strategy Website – December 26, 2020)

Aladdin Azvaji, Director General of the Employment Policy and Development Office of the Ministry of Labor, said in this regard: In the spring of this year (2020) compared to the spring of last year, about 749,000 women have lost employment and during the spring to summer 2020 about 120,000 more women lost employment, indicating the widespread impact of Covid-19 on women’s employment. (The state-run Arman newspaper – January 30, 2021)

In addition, it was previously reported that in the winter of 2019, about 145,000 women became unemployed compared to the same period last year. (The state-run ILNA News Agency – April 11, 2020)

Women entrepreneurs are few in Iran. Finding adequate financial resources, access to information, gaining the trust of banks, markets, and partners, and creating a balance between work and family (when, under the regime’s civil law, a man can keep his wife out of work), are some of the obstacles and problems for women in starting a business.

Regarding government laws and policies, she continues: “The lack of permission of husbands and fathers to leave the country, the lack of tax and economic incentives and support, and the lack of economic literacy of some officials have led to measures commensurate with women’s dignity and empowerment over the past 40 years not being done.”

She also said about women being pushed into domestic work: “Women’s institutions are focused only on family issues and if they pay attention to the economy, they will look for everything in domestic jobs, while these types of jobs are unsustainable and cannot lead to the empowerment of women in a desirable way.”

A few years ago, Massoumeh Ebtekar, the deputy for women and family affairs, admitted that in Iran, “women are disappearing in top management positions.” (The state-run Asriran.ir – October 31, 2017)

But three years later, on October 20, 2020, the Court of Administrative Justice annulled this directive due to “unjustified discrimination against other employees in holding managerial positions, especially basic management.” While this directive concerned women and youth, it is interesting to note that the Supreme Administrative Court has been sensitive to women. (The state-run Sharq newspaper – November 20, 2020)

It should be emphasized that the women who have passed the scrutiny of the Guardian Council and are eligible to participate in the regime’s elections are all promoters of the mullahs’ misogynistic views and facilitate the advancement of the regime’s goals of imposing more and more restrictions on women.

In terms of political participation, it should be said that major decisions and policies in Iran are the prerogatives of men. The position of Velayat-e-Faqih (Supreme Leader), the Guardian Council, the Expediency Council, the heads of the three branches, the cabinet ministers, the governors, the mayors of the provincial capitals, are all men.

The participation of women in the deputy ministerial roles is 5.5 percent, in the management of the provinces 7 percent (77 women among 1174 provincial officials), in the municipalities of all cities 0.58 percent (2 out of 339 mayors), and in the city councils 11.8 percent (38 women among the 321 members of city councils).

Gender Gap in Iran: Prohibition of women from music activities

Ali Khamenei, the Supreme Leader of the mullahs, reiterated a ban on female singing in a new fatwa last year. In response to the question of whether listening to the voice of a female singer who sings solo is forbidden for non-mahram men, he replied: “Avoid listening to what is usually corrupt.” (The state-run Tasnim news agency – July 14, 2020)

In this regard, on January 16, 2021, two soloists of a women’s music group in Kermanshah named Glaris were summoned and arrested by the security police for participating in the production of a promotional video for furniture store. Nazanin Atabaki and Nasrin Yazdanipour were released on bail the next day after completing their interrogations. (The state-run Khabar Online news agency – January 17, 2021)

Of course, this restriction is not limited to soloist women, and other female artists are also restricted from performing.

Mahdis Ebrahimian, a two-string guitar solo teenager, cannot play the string because of her gender. She said that many times there was coordination with her before performing in a program and that she had spent a few days practicing, but before the program, she was informed that her performance had been canceled and that she was not allowed to perform because she was a girl. (The state-run ILNA news agency – July 4, 2020)

Prevention of the husband from employment and leaving of the wife

With the ruling of the Tehran Court of Appeals, a female emergency physician in Imam Hossein and Baqiyatallah hospitals in Tehran was banned from practicing medicine due to her husband’s complaint. The doctor examined 180 to 200 patients daily for Covid-19. (The state-run Akhbar Fori website – October 12, 2020)

Also, from now on, married women who want to take the dental residency exam are required to obtain their husbands’ consent. Execution of this commitment that the text entered in the test is mandatory. According to this commitment, the husband agrees to allow his wife to serve after the end of the training period in any place designated by the Ministry of Health and Medical Education. (The state-run Etemad newspaper – May 11, 2020)

Moreover, it was reported that Samira Zargari, the head coach of the national alpine skiing team, was banned from leaving the country due to her husband’s objection. She could not go to Italy with her team for the competition. A source in the Ski Federation said that the efforts of the federation officials to lift the exit ban and to send her to the Italian competitions did not succeed. (The state-run Sharq newspaper – February 17, 2021)

According to Article 1117 of the Mullahs’ Civil Code, a husband can forbid his wife from a profession or industry that is contrary to the interests of the family or the dignity of the man or woman. Paragraph 3 of Article 18 of the Passport Law also explicitly conditions the issuance of passports for married women to the written consent of the husband. But before marriage, the exit permit for the woman is given to the father or paternal grandfather.

Last year, the Ministry of Education of the Mullahs’ regime removed the image of girls from the cover of the third-grade math textbook, which had a wide negative impact on Iranian society. Nasim Bahari, the illustrator of the cover of the math book, wrote on her personal page: “I drew this design for the third-grade math book a few years ago. The original plan was audited and they did not allow one of the girls to be on the tree!” (The state-run IMNA News Agency – September 12, 2020)

The women’s boxing department in Khuzestan Province was banned from any activity.

Hamid Zanganehmanesh, head of the Khuzestan Boxing Board, said, “According to a recent letter from the Boxing Federation, any activity in the women’s section of the field, including coaching, training, teaching and holding theory classes, is prohibited.” He added: “Also, no male instructor in the province has the right to teach boxing to women, and if this is done, the consequences will be borne by the offender.” (Ostan Wire – May 31, 2020)