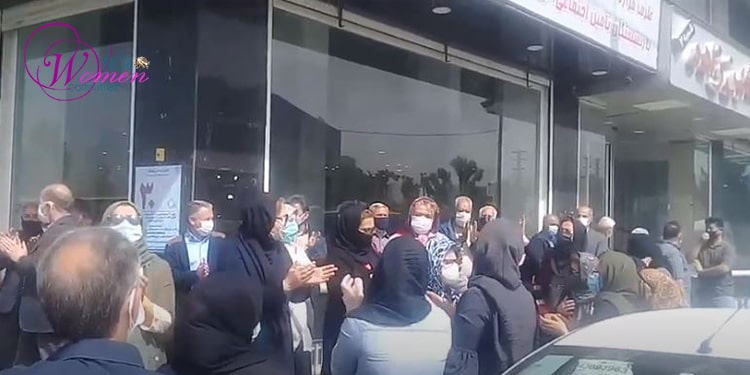 Retirees and pensioners including a considerable number of women held their second nationwide protest on Wednesday, April 7, 2021, in Tehran and 24 other cities.
In addition to Tehran, Iranian retirees and protesters held their protests in the cities of Sari, Ahvaz, Urmia, Qazvin, Karaj, Rasht, Khorramabad, Kerman, Ardabil, Shush, Andimeshk, Shooshtar, Tabriz, Ilam, Arak, Yazd, Abadan, Khorramshahr, Dezful, Isfahan, Kermanshah, Bojnurd, Shahroud, and Shiraz outside the local social security offices.
The nationwide protests were against dire living conditions, low wages, and high prices.
The retirees condemned the entire clerical regime and chanted: We have heard too many lies, we will no longer vote;
We have not seen any justice, we will no longer vote;
The imprisoned retirees must be released;
Inflation, high prices, Rouhani must be held accountable;
Shame on the government;
We will not rest until we obtain our rights;
Our baskets are empty, enough of repression;
Parliament, Government, stop deceiving the people;
To overcome empty plates, we must take to the streets.