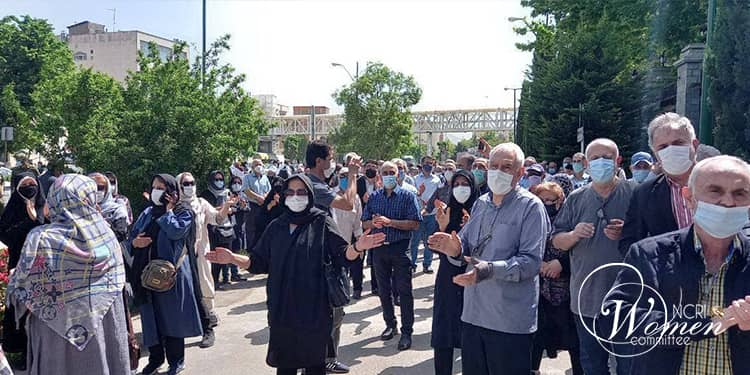 Iran’s pensioners and retirees held their fourth round of nationwide protests on Wednesday, April 14, 2021, in 22 cities around the country. They called for the boycott of the regime’s sham presidential elections.

In Tehran, Iran’s pensioners and retirees including many women marched from the mullahs’ parliament to the Department of Budget, with chants of: “People join us, our pain is your pain.”

In most cities, the state security forces lined up and surrounded the protesters to prevent other people from joining them. They prevented taking films from these demonstrations and protests.

Also on Wednesday, April 14, 2021, defrauded investors including many women gathered outside Tehran’s Stock Exchange building, and chanted, “Death to Rouhani,” and “We won’t vote because we did not see justice.”

In yet another development on Monday, April 12, 2021, a group of young teachers held a protest gathering outside the mullahs’ parliament. They expressed their grievances over the low salaries of 3 million Tomans when the poverty line stands at 10 million Tomans.