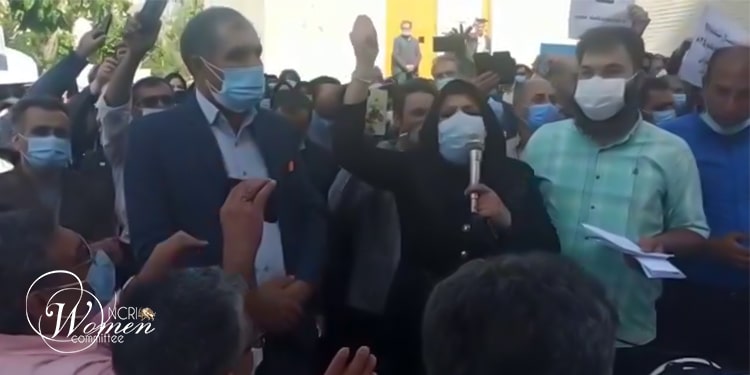 Once again, the leading role of women came to light during the protests on Monday, April 19, 2021, in various parts of Iran.

Teachers, farmers, and defrauded investors held protests in Tehran, Isfahan, Karaj, Mashhad, and Ardabil, among others. Again, Iranian women played their leading role in these protests.

In a protest in Vajareh village in Isfahan Province, farmers held a protest gathering in front of their village’s mosque (Mahdiyeh). These farmers demand to receive their share of water from Zayandehrood river which passes through Isfahan. A number of female farmers participated in this sit-in protest.

A young man called on the youth, shopkeepers, truck owners, and other tradesmen to join their strike. Then a female farmer made a speech and called on everyone to stand firm and not relent until they gain their share of water. In parts of her speech, addressing government officials, she said: “You are the outlaw! You are the criminals! You are the ones who must be prosecuted. It has been several years, now, that you have betrayed the farmers and their rights. I am a woman farmer.

“I swear to God while I am fasting… and I pray to God to cut the hands of traitors from Zayandehrood. They have stolen our rights. So much that they have fed on unlawful profits, they have become blind and deaf. But this time, we are going to stand for our rights with all our might. Even if all of us are killed…

“Let the future generations know that when their city’s assets were stolen, there were brave people who stood up to the traitors and gained back their share of water from Zayandehrood. Even if I am executed (in public), if I am killed, if me and my children are killed, we will gain back Zayandehrood.” (Watch the videos)

Zayandehrood river used to be one of Iran’s largest rivers with abundant water. In the past years, the Revolutionary Guard Corps has diverted the route of this river for its own military and nuclear projects. As a result, Zayandehrood has dried up in Isfahan Province and farmers cannot use its water for their crops.

Leading role of Iranian women in teachers’ protest in Karaj

In another protest gathering in Karaj of teachers who have graduated from colleges on the same day, a woman from Hashtgerd delivered a speech calling on the protesters to rise up and take back their rights. For making this speech, she was arrested and detained for 24 hours. (Watch the video)

Leading role of women in the Tehran protest

In Tehran, the defrauded investors of the stock exchange held their protest in front the mullahs’ parliament. They marched in the streets of downtown crying out chants of “death to Rouhani” and “we won’t vote so much that we heard lies.” Women led the crowd of protesters during the march in Tehran.

In Mashhad, capital of Khorasan Razavi Province, NE Iran, the defrauded investors of the stock exchange held a protest outside the Governor’s building. They held banners which read: “People care more about the stock exchange rather than the JCPOA.”

In another gathering in Ardabil, literacy movement teachers held a gathering outside the Department of Education in this city in northwestern Iran. The protesters have 10 years of work experience and they have passed the employment exam. The Education Ministry, however, has not employed them, yet.

In the protests of Social Security retirees and pensioners in Tehran on Sunday, April 18, 2021, agents of the State Security force clashed with the protesters. They arrested two women and a man. There is still no information available on their names.

The retirees’ fifth nationwide protest on Sunday took place in 17 cities across the country.