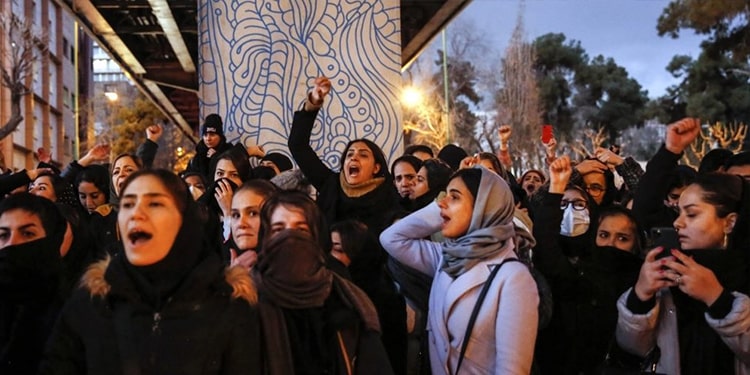 Shamefully, the CSW 65th session on Monday, April 19, 2021, elected Iran’s ruling religious fascism, the first enemy of Iranian women, as a member of the UN Commission on the Status of Women for a four-year term from 2022 until 2026.

With brewing social discontent in Iran, the misogynous religious dictatorship will definitely not last long enough to see its 2022 membership in CSW.

However, as a principle, in light of its misogynous laws and constitution as well as its violent and discriminatory conduct towards women, the clerical regime is not qualified to sit on a UN commission which has been described as “vital for women and girls of the world.”

Membership of Iran’s ruling theocracy in the UN Women’s Commission is an affront to Iranian women and girls. The UN Human Rights Rapporteur on Iran says the regime continues to treat women and girls as second-class citizens.

On the contrary, the regime promotes exclusion and marginalization of Iranian women, despite their high potentials and great talents.

The mullahs’ parliament has just recently adopted a plan to marginalize women at home by encouraging population growth to increase the fertility rate. This while the bill to protect women against violence has been lingering in the parliament since January after the government adopted it with a 15-month delay.

Describing the CSW measure as “outrageous and shameful,” the NCRI Women’s Committee Chair, Sarvnaz Chitsaz, pointed out: Electing the misogynist, fascist regime in Iran to the UN Women’s Commission gives it a free rein to further suppress and marginalize Iranian women.”

The NCRI Women’s Committee believes that “membership of Iran’s ruling theocracy in the Commission on the Status of Women (CSW) gives the regime a green light to suppress Iranian women more and more.”

The NCRI Women’s Committee urges the international community to condemn the UN’s election of Iran to a 4-year term on CSW, the “principal global intergovernmental body exclusively dedicated to the promotion of gender equality and empowerment of women.”

Despite the CSW’s disgraceful vote, the people of Iran and particularly Iranian women have vowed not to vote for this regime and its sham elections. And it will not be long before the Iranian people and Resistance will overthrow the regime and replace it with a democratic, pluralist government.