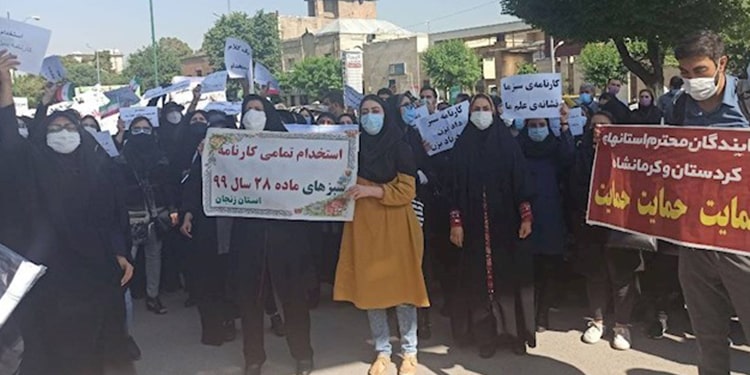 Young teachers converged in Tehran to protest their unemployment

Social Security pensioners and retirees held their weekly protest in Tehran and 12 other cities on Sunday, May 9, 2021.

They held their protests despite the clerical regime’s threats and intimidations.

The living conditions of Social Security pensioners and retirees are intolerable as their salaries are way below the poverty line.

In Tehran, the regime’s suppressive forces and plainclothes agents lined up in front of the Social Security Organization to prevent the formation of the protest.

The cities of Boroujerd, Karaj, Tabriz, Mashhad, Rasht, Khorramabad, Sanandaj, Isfahan, Kermanshah, Shiraz, Shush, and Marand saw the protests by pensioners and retirees outside the departments of Social Security.

The protesters chanted: “We can gain our rights only by taking to the streets”; “our salaries are paid in Rials, while expenses cost dollars”; “social security! what a wrong name”; “Retirees, rise up against oppression”; “the Coronavirus and discrimination have left no one thinking of us”; “So much that we have heard lies, we won’t vote again”; “death to Rouhani”; “free all imprisoned workers”, etc.

Iranian students also continued their protests on Sunday, May 9, 2021, in the cities of Bandar Abbas, Tabriz, Kerman, Mashhad, Qom, and Karaj outside their local Department of Education. They are protesting in-person examinations called for by the Education Ministry despite the pandemic.

The State Security forces and plainclothes agents attempted to prevent formation of these protests. They confiscated the mobile phones of anyone who took films and photos. In Mashhad, several students were arrested.

On the other hand, young teachers from various cities converged in Tehran and held a protest outside the mullahs’ parliament. They are protesting the Education Ministry’s failure to employ them. Most of these teachers are young women.