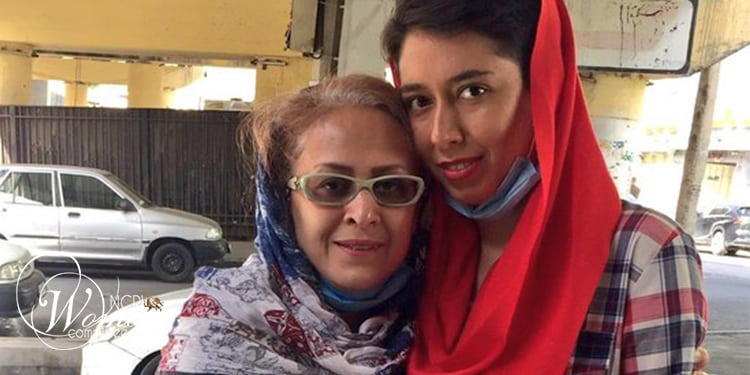 Saba and her mother while briefly on prison leave

Ten days of hunger strike, despite bleeding stomach, to lift pressure from families of political prisoners

Political prisoner Saba Kord Afshari presently incarcerated in Qarchak Prison, went on a hunger strike on May 8, 2021, and refused to take food and medicine.

Her demand was for the clerical regime to lift the pressure it imposes on families of political prisoners. Specifically, Saba Kord Afshari refused food and medicine to gain her mother’s freedom from jail.

Mrs. Raheleh Asl Ahmadi, Saba Kord Afshari’s mother, is presently detained in Evin Prison while she needs to receive medical care and treatment. She endured a nervous shock when Saba was violently removed from Evin Prison and sent to exile in Qarchak Prison. As a result of this nervous shock, she suffered damage to her spine and lost control of her left leg.

Saba Kord Afshari suffers from a stomach ulcer and bleeding, as well as other GI problems. Nevertheless, she went on a hunger strike to have her voice heard. Although she ended her hunger strike on May 17 due to serious health problems, she vowed to continue to uphold her demands.

The following paragraphs contain parts of her letters on May 11, three days into her hunger strike, and May 17, after she ended her hunger strike. In these letters, she explains her history of arrest and imprisonment and vows to continue her struggle for freedom.

On August 2, 2018, in protest to the economic recession, inflation, and the ever-increasing injustice and pressure on people, I, alongside many others, participated in a peaceful rally to protest high prices. Since the Islamic Republic regime has not used any method but sheer suppression in the past 42 years and does not tolerate any protests, they reacted with violence. They arrested all the protesters on the street, including me, demanding their usurped rights.

I spent three months in legal limbo in the Qarchak torture chamber. Then I was sentenced to a year of imprisonment by Judge Mohammad Moghiseh and transferred to Evin prison.

In Evin, I met prisoners who never remained silent in the face of oppression and injustice, prisoners who boldly and freely shouted their demands.

After my release, I conveyed the voices of many political prisoners of conscience.

I just shouted, no!

I refused to sink.

I was just a voice,

a form among other forms,

but I found meaning.

(Verses from a poem by the renowned Iranian poet, late Ahmad Shamlou)

Since I talked about the deplorable conditions of Iran’s torture chambers, including Qarchak;

since I protested the brutal acts of execution and amputation:

since I tried to show that women are not slaves of medieval ages and that they have equal rights as men and that the era of patriarchy is over;

The security forces once again arrested me on June 1, 2019.  This time around, I was sentenced to 24 years by Judge Iman Afshari with a label of corruption and prostitution.

My mother, Raheleh Ahmadi, like many other mothers who seek justice, broke her silence and cried out in protest to the injustice her 21-year-old daughter had faced.  She not only protested for Saba but for all the women and men who were fighting for freedom.  However, the response to this protest and her search for justice was also imprisoning her.

We were only demanding our rights and liberties. The rights and freedoms we have been deprived of for years. But the regime has shown time and again that the answer to such demands is highly costly.

Exile to Qarchak causes illness of the mother

On December 8, 2020, they transferred me to the Qarchak Prison of Varamin under bogus excuses.  The incarcerated mother and daughter in prison and then separated them. How many mothers and daughters, fathers and sons, and families have been torn apart and live in exile inside Iran?

Due to inhumane acts, human rights violations, and the separation of my mother and me, my mother suffered a nervous shock which severely damaged her spine and left her left leg paralyzed.

As if these pressures were not already enough that they decided to implement even harsher conditions.  We were no longer able to visit each other. Although my mother’s situation is dangerous, the prison authorities do not follow up on her hospital visits. They even do not grant her leave on parole, which is the right of every prisoner. (Instead,) they send their mercenaries to us under various pretexts to threaten us.

What should a 23-year-old girl be afraid of when her life and youth have already been ruined?!

I have thoroughly felt and experienced your oppression. Is there anything more that I should witness?!

I think of what all the other prisoners and I have been through;

I ponder, and I take my steps stronger than ever….

I have been on a hunger strike since May 8, 2021, refusing food and medicine in protest of all the killings, tortures, heartbreaks, and threats that are inflicted not only on political prisoners but also on their families.

I demand an end to the pressures imposed on families of political prisoners, and I seek the freedom of my mother, Raheleh Asl Ahmadi.

A hunger strike, the only means of struggle for political prisoners

In parts of a letter in which she announced the end of her hunger strike, Saba Kord Afshari wrote:

For years, they (the ruling dictators) have responded to every protest and strike with bullets and beating….

But they were not able and will never be able to inject the contents of their little rusted brains into our minds. They cannot dictate to others what even they do not believe. As a result, when we raise our clenched fists in protest, they respond with guns and rifles; when we write to express our opinions and goals, they cannot tolerate and break our pens.

The same goes on in prisons. They use various methods to silence prisoners who have no means of struggle except hunger strike and sit-in. They use violence in response to any demand.

You destroyed our bodies and pens, but how are you going to deal with what brews in our minds, and we fear not expressing them. The struggle for freedom does not end with pressure and threats but will find its way through storms to its goal.

Unfortunately, I do not have sound physical health. Knowing it fully well that people’s lives are not worth anything to the Islamic Republic, I have no choice but to end my hunger strike. But I will continue to uphold my demands. Oppression has never endured, and it will not stay.