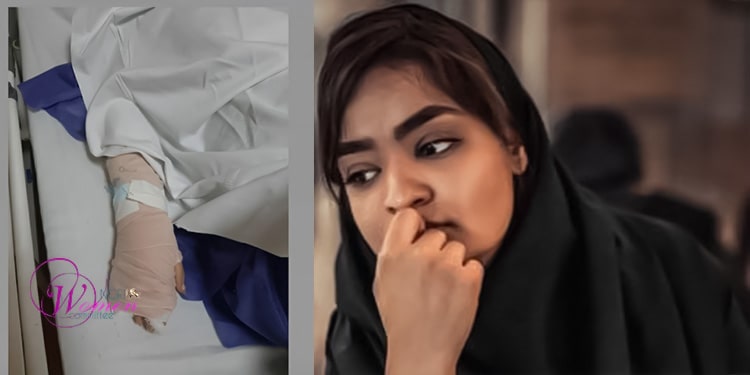 Female journalist Faezeh Momeni was beaten by a security guard at the Saei Complex Vaccination Center on Monday, May 17, 2021.

The center operates under the supervision of Beheshti University of Medical Sciences.

The security agent brutalized the female journalist, breaking one of her fingers after she refused to delete interviews, she had conducted with vaccination center personnel in Tehran. The journalist required surgery after the attack.

During a televised interview, Faezeh Momeni described the incident and stated that she had gone to the vaccination center to report on the work process.

Faezeh Momeni recalled the beating by the security guard: “I was there for an hour and a half. As I was leaving, the agent initially asked me to hand over my cellphone and delete all the interviews. He said, ‘You came here illegally.’ I replied, ‘I had not come illegally. I have a license, I have a press card, this is a public place, and the people I interviewed have agreed.’”

She added, “The agent grabbed me as I was walking out. At the same time, he held on to the bag on my right shoulder and pulled me by the hand to take me. When I forced my hand out of his, I saw that my finger was bent and folded… My hand was broken.”

“A broken and pinned hand is the result of the effort of a journalist who went to write and tell us what is going on in the vaccination center,” the state-run Rouydad24 wrote (The state-run rouydad24 website – May 19, 2021).

The incident also provoked a reaction and protest from the International Federation of Journalists.

Anthony Belanger, Secretary-General of the International Federation of Journalists (IFJ), issued a statement calling for the trial of the perpetrator in the beating of female journalist Faezeh Momeni. “The Iranian government must immediately end its crackdown on the media and end the public prosecution of journalists who are just doing their job,” he said.

Earlier, Reporters Without Borders (RSF) Secretary-General Christophe Deloire stated on press freedom in Iran, “Iran has executed thousands of men and women since 1979, including a score of journalists who were all convicted by unfair courts. Sentencing prisoners of conscience, including journalists, to death, is the most extreme way to suppress freedom of expression. It is time the Islamic Republic finally abandoned these cruel punishments from another era” (RSF – October 9, 2020).