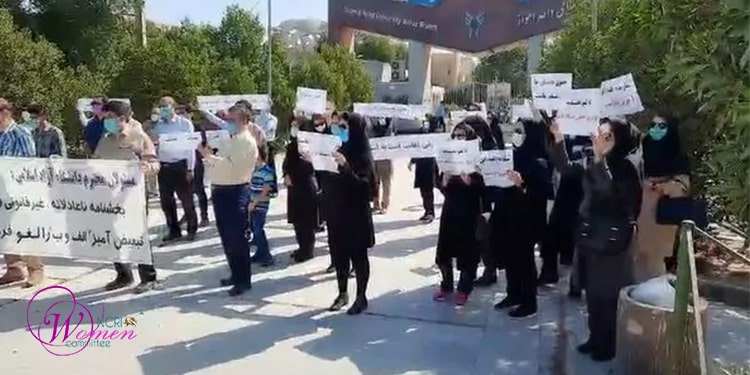 Professors of Azad University of Khuzestan in Ahvaz held a protest

Iranian teachers with various forms of temporary contracts held protests in Tehran and Isfahan from May 29 to June 2, 2021, as this report is being published. Young teachers have vowed to continue their protests until their demands are granted.

These are the protests where women were at the forefront and played a leading role.

On May 30, teachers in Isfahan who work on temporary contracts in private schools held a protest outside Isfahan Province’s Department of Education. The women held placards that read: “Employment is the undeniable right of private school teachers.”

In the meantime, teachers of private schools in Tehran also held a protest outside the parliament. These women held a placard which read: “The government must account, we want justice.”

On May 31, 2021, teachers “selling their services” joined young teachers in Tehran and held a protest across from the mullahs’ parliament. They demand disposition of their employment status by members of parliament.

Young teachers continued their protests on June 1 and 2, as well.

Professors of Azad University of Khuzestan in Ahvaz held a protest on May 30, 2021, against their deplorable living conditions. One of the participants in the gathering outside Azad University said: “Some of our colleagues have serious problems.”

Hospital staffs in Tehran and Karaj

Karaj’s main hospital’s staff held protests on May 28 and 29, 2021, inside the hospital complex. The staff and personnel of this hospital are living under very difficult conditions. Women actively played a leading role in this protest. They chanted: “We have been hearing lies for five years” and “enough with hollow promises, our baskets are empty.”

In Tehran, the Bou Ali Hospital’s staff also held a protest on May 28 against their small salaries. They denounced the hospital’s corrupt and incompetent management.

Investors in the Caspian Financial Institute held a protest outside the Judiciary building in Tehran on May 30. The defrauded clients have not yet received their deposits after five years.

On June 1, 2021, landowners in Phase 6 of Pardis held a protest in Tehran outside the Judiciary building. They protested against the company in charge of the construction of the new city of Pardis. The company has robbed them of their investments.

The ban on women’s cycling: Unwritten law ordered by the misogynist mullahs