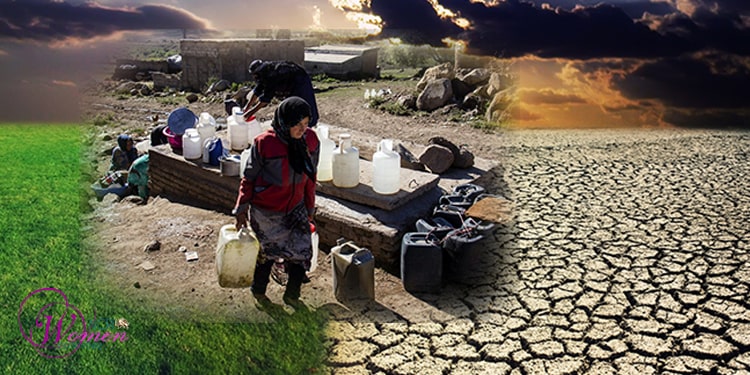 Iran’s environment destroyed and massacred by the misogynist mullahs

World Environment Day is an opportunity to briefly review the mullahs’ destruction and massacre of Iran’s environment.

The UN emphasizes the need for effective role of women in preserving the environment. The United Nations also emphasizes that success in environmental protection programs is a function of women’s participation and empowerment. The Iranian regime, however, has never pursued such goals throughout its 4-decade rule. It has furthermore arbitrarily detained and sentenced environmental activists, many of them women.

The Iranian regime is not protecting the environment but destroying it. As a result, it could not integrate gender perspectives and concerns into its non-existent environmental policies. The destruction of environment in Iran has led to poverty and destitution of a large portion of the populace.

While part of the problem can be attributed to the global climate change, the regime must be blamed for adopting wrong policies which have aggravated the conditions.

The clerical regime does not have any policy to conserve and protect the environment. In fact, it has done the opposite throughout its rule, destroying the country’s natural resources, its infrastructures, and adding to air pollution.

The unfettered construction of dams and wrong plans to transfer water from basin to basin to provide for the regime’s nuclear weapons program, and the unmanaged establishment of industries, and the emphasis on unprincipled and high-consumption agriculture to reap profits for the ruling clique, have accelerated the process of desertification and drought in Iran.

The regime’s inefficient management of the share of natural water from available resources have boosted desertification in Iran. Desertification is no longer just the drought of lands and aqueducts, but the decline in soil fertility and increased migration are also among its consequences.

One of the causes of unwanted migration of villagers and expansion of slums around metropolises is water shortage and drought in different parts of the country.

Some 20 percent of the country’s lands are located on the desert strip, which is called by the state-run outlets as a silent earthquake. Currently, 18 out of 31 provinces and 97 cities of Iran are involved in desertification, and these numbers are increasing annually.[1]

Air pollution and its impact on Iran’s environment

Air pollution is increasing and biodiversity in Iran has suffered unprecedented destruction, as statistics released by the Global Carbon Project show that Iran is the seventh largest air polluter in the world with an annual emission of 648 million tons of carbon dioxide.

Drying up of Lake Urmia in the northwestern province of West Azerbaijan,[2] drying of Zayandeh Rood in Isfahan in central Iran and other rivers, dust storms and haze in southwestern Khuzestan Province, scarcity of water all across the country, as well as alarming air pollution levels in Tehran and other metropolises, are some of the major environmental disasters in recent years.

Iran is now among the countries with the highest rate of soil erosion, exploitation of water resources, desertification, and so forth. Today, there’s not a single living wetland or lake in the country. [3]

Iran’s groundwater resources are running out

The Islamic Revolutionary Guard Corps (IRGC), which dominates the country’s Armed Forces and economy, has had an extremely destructive role in this regard.

The IRGC has changed the path of rivers and built numerous dams in wrong locations to serve the regime’s nuclear and military projects. The drying of Lake Urmia, Zayandeh Rood river, and other major rivers in Khuzestan and Kohgilouyeh and Boyer Ahmad provinces are attributed to the IRGC projects. [5]

The IRGC’s Khatam al Anbiya Construction Headquarters is one of the regime’s agencies that is fully involved in destroying Iran’s environment and natural resources. The company announced in September 2020 that it has 10 trillion Tomans’ worth of construction plans in progress in West Azerbaijan Province, alone. Building dams is a part of its portfolio of projects.

The IRGC’s Khatam al Anbiya Construction Headquarters has built at least 62 dams across the country; this represents 50 percent of Iran’s reservoirs and dams. The company currently has 285 constructive projects in progress. [6]

Reza Bayani, director of studies in the Forests Organization, told ISNA that 12,000 hectares of forests were destroyed annually in Iran between 2015 and 2020. (The state-run ISNA news agency – June 4, 2020).

Dehydration a main reason for rural migrations and slum-dwelling

The regime has issued permission to raze large parts of Iran’s jungles and forests to smuggle wood out of the country, to construct hotels and buildings in the natural course of rivers to earn more money. They export the country’s water for economic and political profits. [7]

They have sold out the Caspian Sea and allowed Chinese companies to use industrial fishing methods causing irreversible damages to the Persian Gulf environment. By doing so, they have virtually eliminated the source of income for local people and vastly contributed to the destructions caused by natural disasters such as the case in the flash floods which washed away large parts of the country in spring 2019 and afterwards.

“The dams built by the Ministry of Energy at the source of the Kor River have stored water behind these dams. The economic and profit-oriented view of the Ministry of Energy has left the villagers without water and has led to unwanted migration and slum-dwelling around the metropolises.” (The state-run ILNA news agency – December 15, 2018)

As a result of such destructive policies, whoever attempts to take any step to voluntarily conserve the environment and natural resources, comes automatically into collision with the state interests and is accused of jeopardizing the country’s national security.

Employees of the Environmental Protection Organization held a protest on October 26, 2015, where they protested mismanagement of the country’s environment, by overlooking experts’ views. The organization’s response, however, was to order protesters to leave if they were discontented. [8]

[7] A report aired on an Iraqi TV channel, Iran’s Foreign Affairs Minister, Javad Zarif had negotiations with Iraq last year on exporting Khuzestan’s water to Basra. The event was not carried by Iranian news agencies and Iranians were unaware of it until the al-Baladi TV station covered it. A number of amateur videos were also published online showing large pipes carrying fresh water to Iraq.