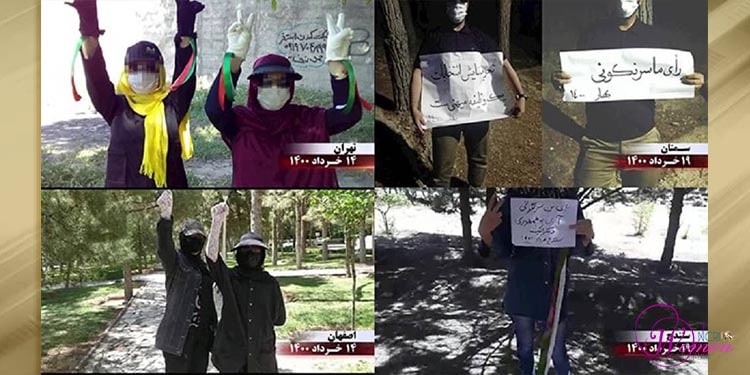 The election is a joke, an Iranian dissident says from Tehran

With no religious or academic qualifications, Ebrahim Raisi has risen through the ranks of thugs with a 40-year track record of executions and repression, the Scottish National newspaper wrote on Iran elections on Sunday, June 13, 2021.

Iran elections has been described as “fixed” and a “sham” since the 12-strong Guardian Council whittled down almost 600 candidates to just seven hardliners in favor of the Iranian regime’s supreme leader Ali Khamenei’s favorite candidate, Ebrahim Raisi, to assume presidency, the National added.

The National introduced Raisi as the “henchman of the 1988 massacre” – the murder of more than 30,000 political prisoners, most of them PMOI activists or supporters – in which he played a leading role in the killings. Raisi was a member of the Death Commission in Evin and Gohardasht prisons in 1988, playing the part of prosecutor,” the Scottish paper wrote.

But really, who is Ebrahim Raisi?

To find out more, the Scottish National interviewed two Iranian dissidents. Hamid, 58 and an academic, from Tehran, and Farideh Goudarzi, a former political prisoner detained six years for her ties to the Iranian Opposition People’s Mojahedin Organization of Iran.

Hamid told the National the election this coming Friday was a joke. “We see repression, arrest, execution, censorship and dictatorship,” said Hamid.

Farideh Goodarzi, a witness to the crimes of Ebrahim Raisi in prison, tells the National about her torture in prison.

Farideh Goudarzi was arrested in 1983 on charges of supporting the PMOI, and spent almost six years in Hamedan and Nahavand prisons –when Raisi was only 21 and already appointed as a prosecutor.

“When I was arrested in the summer of 1983 in Hamedan, I was nine months pregnant and was to give birth within few days,” she said.

“From the very first hour of my arrest, despite not feeling too good physically, I was taken to a torture chamber like all other prisoners.

It was a room with a bed in the middle and a number of power cables of various diameters on the floor and blood spilled on its floor, indicating that some

prisoner had been tortured there.

“When I was flogged by cable, there were seven or eight people in the room. One of them was this criminal Raisi. Of course, I did not know who he was

for a while … I found out that this person was the prosecutor of the Hamedan court.”

Referring to the record of Ibrahim Raisi, Goodarzi says, “From 1982 to 1985 he was directly involved in the imprisonment, torture and execution of many political prisoners, especially supporters of the Mojahedin, and I must emphasize that he personally executed many and was present at the scene to implement the verdicts.”

She read a list of names of girls, some as young as 16, who were raped before being executed in the prisons.

Goudarzi then relived the torture inflicted on her month-old son in prison,

when the Iranian revolutionary guards came into her cell at 1am: “When they entered my cell, they picked up my son, while he was asleep and threw

him on the ground in a cruel and ruthless manner, and, ignoring his cries, they took off his clothes.

They said they were looking for documents and evidence [against me]. The next day, from 8am to 2pm, I was taken to court with my son and interrogated.

More than 10 torturers were present in the interrogation room, one of whom was Ibrahim Raisi, now a presidential candidate.

“During six hours of interrogation, one of them took my son by the hand and while his crying could not be stopped because he was hungry, he slapped him on the back in front of my eyes and the others laughed.

Raisi was also watching this scene.”

She said she also recalled the memory of her mother who went to visit her son in Evin prison, where he had been incarcerated for six years.

“I can still hear my mother crying and wailing, a mother who went to visit her son in that bloody summer and they handed her the blood drenched clothing of my brother, Parviz Goudarzi, who was martyred in Hamedan prison during the massacre. “We will not stand idly by until the day that all the perpetrators of crimes against humanity in Iran are brought to justice, and that day is not too far” Goudarzi reiterated.