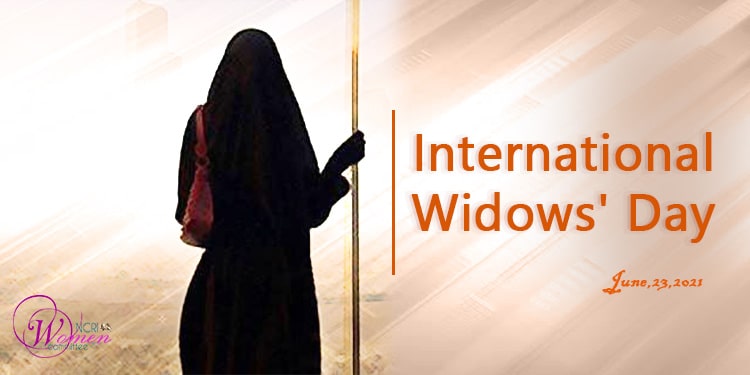 Iranian widows are often suffering mothers whose identities are in the shadows of their husbands.

According to the former UN Secretary-General, “In places where a widow’s status is linked to her husband, she may find herself suddenly shunned and isolated. Marriage – whether she desires it or not – may be the only way for a widow to regain her footing in society.”

On this World Day in 2020, the UN Secretary-General said, “The death of a partner at any time can leave many women without rights to inheritance or property. In times of a pandemic, these losses are often multiplied for widows and accompanied by stigma and discrimination. The unprecedented levels of isolation and economic hardship brought on by the COVID-19 crisis can further compromise widows’ ability to support themselves and their families, cutting them off from social connection at a time of profound grief.”

These problems multiply for Iranian widows under the misogynistic mullahs’ regime.

The United Nations’ goals targeting discriminatory laws and ensuring social support and protection for widows have never been part of the ruling mullahs’ agenda, and never will be.

According to some experts, one of the most critical issues for Iranian widows is the lack of financial independence. Low salaries leave them unable to support themselves or manage their lives. One of the most significant issues for these women is finding a suitable job.

In such situations, widows have no choice but to work in workshops for meager wages or under circumstances similar to slavery. These women do not complain because they fear being fired. Even if they complain, there is no room for women’s rights in judicial system of the misogynistic mullahs’ regime.

Divorced women suffer more than men. They cannot find work as quickly as they used to when they were married, even in their same work environment. Some people who know them ask for friendship or temporary marriage so they can abuse these women.

Lack of transparency in statistics on Iranian widows

It is not clear exactly how many widows live in Iran. According to Iran’s Statistics Center, there are about 5.1 million widows or divorced women in Iran (The state-run jahanesanat.ir – September 21, 2020).

However, on July 4, 2011, the state-run Shargh newspaper had put this number at 6 million.

This contradictory statistic, like other statistics on social and economic problems in Iran, is due to lack of transparency. However, the scattered statistics published in the regime’s media show a greater catastrophe.

Iranian widows suffer from physical and mental illnesses, including cardiovascular disorders, diabetes, and tension headaches as a result of their struggle to survive.

Moreover, social harms such as prostitution or begging in Iran are on the rise. This is attributed to the increase in divorce rates, the decrease in the age of divorced women, the high cost of living, and unemployment problems (The state-run asriran.com – July 22, 2020).

The regime has never aimed to facilitate women’s employment or remove obstacles to women’s social and political participation, nor will it. Instead, its propaganda clearly exposes it as a one-sided and irresponsible preacher that advocates for early marriage and childbearing.

With its rich cultural diversity, the only way for Iran to save its widows is to resolve the problem at its source: remove the misogynistic mullahs’ regime.