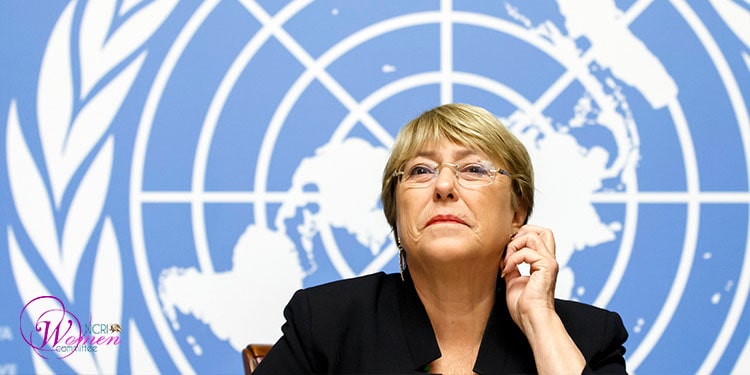 The UN Rights Chief on Monday, June 22, 2021, presented the UN’s annual report on the situation of human rights in Iran.

Michelle Bachelet presented the Secretary-General’s report on human rights in Iran to the opening of the UN Human Rights Council’s 47th session, which will last until July 13. The session is being held virtually due to continued Covid-19 restrictions.

Michelle Bachelet noted that the Secretary-General’s report covered the period from 1 June 2020 to 17 March 2021.

She said the existence of sanctions did not remove the State’s responsibility to respond to the pandemic in line with human rights law.

The UN Rights Chief pointed out that lawyers and numerous civil society activists had been imprisoned for advocating women’s rights and an end to compulsory veiling laws. Overall, the report found a disturbing human rights landscape for Iranian women and men of every religious faith, ethnic origin, social class, and other status. The High Commissioner expressed regret that the framework for the right to political participation was not in line with international standards.

The report by UN Secretary-General Antonio Guterres was published on June 9, 2021, in which he underlined the dire situation of human rights in Iran.

Mr. Guterres said in the report: The overall situation of human rights in the Islamic Republic of Iran remains of serious concern. Notwithstanding the economic crisis, aggravated by the imposition of sectoral sanctions and the coronavirus disease (COVID-19) pandemic, internal factors involving impediments to the rule of law and weak justice and accountability mechanisms result in impunity, perpetuate existing violations and increase the risk of future violations. The failure to establish a mechanism in accordance with international law for accountability and remedy for violations committed in the context of protests in November 2019 is emblematic. Protesters, human rights defenders, lawyers, and civil society actors continue to be subject to intimidation, arbitrary detention, and criminal prosecution, including the death penalty.

The Secretary-General expressed concern that: “The targeting of relatives and new charges brought against human rights defenders and lawyers to prolong their arbitrary detention are disturbing developments… For example, women’s rights defenders Atena Daemi and Golrokh Iraee have received new prison sentences, keeping Ms. Daemi in prison, and returning Ms. Iraee after being released. Another worrying trend is the punitive transfer of prisoners of conscience, including at least 15 detained women’s rights defenders, to remote prisons.”

The report also noted: “Prisoners of conscience, political activists, human rights defenders, and lawyers are disproportionately excluded from temporary release. As a result, some political prisoners have been in prison for years without a single day of furlough. For example, Maryam Akbari Monfared, sentenced to 15 years imprisonment for participating in protests in 2009, has been imprisoned for the past 12 years. Harassment against her increased after she filed a formal complaint, seeking an official investigation into the 1988 executions of political prisoners, including her siblings. Similarly, Zeinab Jalalian, a Kurdish political prisoner serving a life sentence for moharebeh, has been held in prison since 2008 without furlough.”