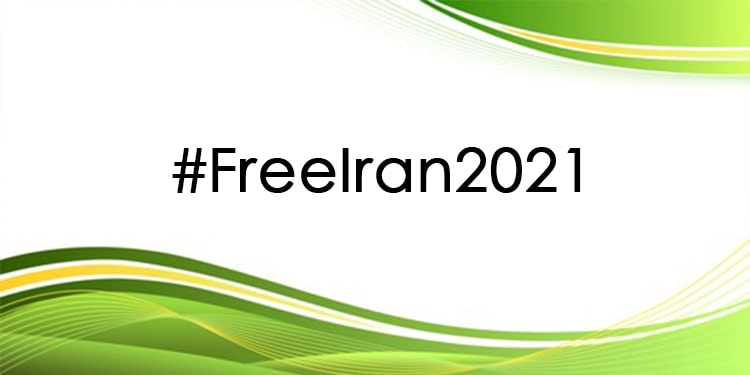 The National Council of Resistance of Iran (NCRI) will be holding its annual gathering ten days from now. The online Free Iran World Summit 2021, scheduled on July 10 – 12, 2021, will be the largest gathering of its kind.

Tens of thousands of Iranians, global advocates for democracy, senior lawmakers, former senior government officials, and other distinguished personalities from the United States, Europe, Australia, Middle East, and Africa will be joining the NCRI. Iranian women and their sisters worldwide play an indispensable part on all levels in this event.

The purpose of the Free Iran World Summit 2021 is to highlight the Iranian regime’s crisis of survival, the desire of the Iranian people for freedom and democracy, and a secular and democratic republic. The speakers will also discuss the right policy towards the clerical regime in Iran and the Ten Point Plan of Maryam Rajavi, the NCRI’s President-elect, for future Iran.

Time to end impunity of the clerical regime leaders in Iran

The Free Iran World Summit 2021 will also promote policies and civil actions that demand accountability from Iran’s clerical regime. A particular focus would be on the regime’s next president, Ebrahim Raisi.

Raisi was a member of the “death commission” in Tehran, which sent 30,000 political prisoners to the gallows in 1988. None of the prisoners had been sentenced to death.

The Iranian opposition’s long-time call for the prosecution of the masterminds and perpetrators of the 1988 massacre in Iran has gained ground. Most recently, Amnesty International’s Secretary General Agnès Callamard, in a statement, said: “That Ebrahim Raisi has risen to the presidency instead of being investigated for the crimes against humanity of murder, enforced disappearance, and torture is a grim reminder that impunity reigns supreme in Iran.”

On June 29, in an interview with Reuters, the U.N. investigator on human rights in Iran, Prof. Javaid Rehman, also called for an independent inquiry into allegations of state-ordered executions of thousands of political prisoners in 1988 and the role played by President-elect Ebrahim Raisi as Tehran deputy prosecutor.

The European Parliament and parliamentarians from the U.K., Germany, Australia, and other countries have also been addressing the issue in recent days, calling for imposing sanctions on Raisi using the Magnitsky style sanctions.

It is time to end the impunity that Tehran’s leaders have long enjoyed in the wake of crimes against humanity committed against the Iranian people.

Massive popular uprisings shook the clerical regime to its core in 2018, 2019, and 2020. Millions of Iranians took to the streets in hundreds of cities across the country to demand democratic change. The regime responded with bullets and executions.

Desperate to prevent another uprising that could overthrow the regime, the mullahs’ supreme leader Ali Khamenei needed to quickly close ranks and cement power. He sees absolute suppression as the only way to prevent another major uprising as the economic situation has worsened by the day.

So, 2021 is a particular year for Iran. The regime is facing several existential crises that continue to intensify. The economy is in dire straits, social discontent is at an all-time high, Tehran is severely isolated, its infighting is deepening with the purge of the so-called “moderate” factions, and the Iranian opposition calling for the regime’s overthrow is gaining ground.

The Ten Point Plan, first presented by Mrs. Maryam Rajavi, the NCRI’s President-elect, is the Iranian Resistance’s platform for future Iran. It reflects the most urgent demands and desires of the Iranian people.

The Ten Point Plan has been receiving worldwide recognition, among others, by the majority of the U.S. Congress endorsing Resolution 118 in April 2021.

1. Rejection of velayat-e faqih (absolute clerical rule). Affirmation of the people’s sovereignty in a republic founded on universal suffrage, free elections, and pluralism;

2. Freedom of speech, freedom of political parties, freedom of assembly, freedom of the press and the internet. Dissolution and disbanding of the Islamic Revolutionary Guard Corps (IRGC), the terrorist Qods Force, plainclothes groups, the unpopular Bassij, the Ministry of Intelligence, Council of the Cultural Revolution, and all suppressive patrols and institutions in cities, villages, schools, universities, offices, and factories;

3. Commitment to individual and social freedoms and rights in accordance with the Universal Declaration of Humans Rights. Disbanding all agencies in charge of censorship and inquisition. Seeking justice for massacred political prisoners, prohibition of torture, and the abolishment of the death penalty;

4. Separation of religion and state, and freedom of religions and faiths;

5. Complete gender equality in the realms of political, social, cultural, and economic rights, and equal participation of women in political leadership. Abolishment of any form of discrimination; the right to choose one’s own clothing freely; the right to freely marry and divorce, and to obtain education and employment. Prohibition of all forms of exploitation against women under any pretext;

6. An independent judiciary and legal system consistent with international standards based on the presumption of innocence, the right to defense counsel, right of appeal, and the right to be tried in a public court. Full independence of judges. Abolishment of the mullahs’ Sharia law and dissolution of Islamic Revolutionary Courts;

7. Autonomy for and removal of double injustices against Iranian nationalities and ethnicities consistent with the NCRI‘s plan for the autonomy of Iranian Kurdistan;

8. Justice and equal opportunities in the realms of employment and entrepreneurship for all people of Iran in a free market economy. Restoration of the rights of blue-collar workers, farmers, nurses, white-collar workers, teachers, and retirees;

9. Protection and rehabilitation of the environment, which has been massacred under the rule of the mullahs;

10. A non-nuclear Iran that is also devoid of weapons of mass destruction. Peace, co-existence, and international and regional cooperation.

So, join the Free Iran World Summit 2021 in solidarity with the Iranian people, particularly Iranian women, and their desire for democratic change and freedom in Iran.