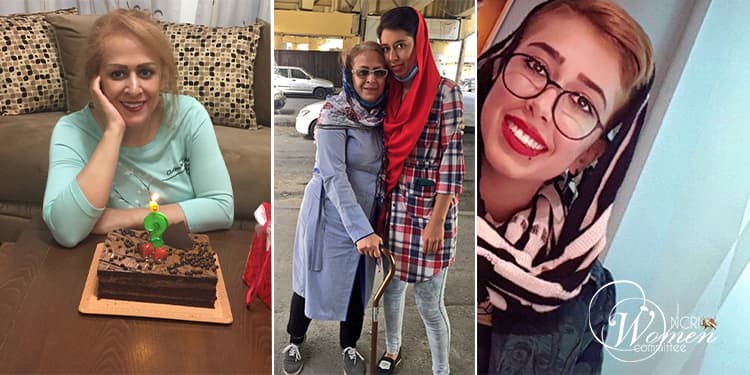 Saba Kord Afshari and her mother, Raheleh Ahmadi Asl, have declared that they refrain from going to the visitation hall as an act of protest against being deprived of having inter-prison calls and visits.

Amin Vaziri, the assistant prosecutor who oversees the cases of political prisoners, who has also interrogated Saba Kord Afshari, has ordered the ban. The ban is in breach of the clerical regime’s prison laws which forsee visits between family members, even if they are detained in separate prisons.

Saba Kord Afshari is detained in Ward 6 of Qarchak Prison among dangerous criminals, in violation of the principle of separation of crimes.

Mrs. Raheleh Ahmadi Asl is detained in the women’s ward of Evin Prison. She is in dire health and on the verge of paralysis.

Raheleh Ahmadi is the mother of Saba Kord Afshari. She was arrested to put pressure on her daughter. She is sentenced to 31 months in prison and has been imprisoned since February 15, 2020. She suffers from thyroid malfunctions which affect her immune system, making her more vulnerable to COVID-19.

Saba Kord Afshari was born on July 7, 1998. She is sentenced to 24 years imprisonment for protesting the mandatory veil, but she must serve 7.5 years in prison.

Saba Kord Afsahri was transferred out of the women’s ward of Evin Prison and sent to exile to Qarchak Prison on December 9, 2020.

Saba Kord Afshari suffers from a stomach ulcer and other GI problems. It was reported that she had contracted the Covid-19 while imprisoned in Ward 6 of Qarchak.

She was granted a week-long furlough on bail from April 3-10. Saba went on a hunger strike from May 8 to 17, demanding that the clerical regime lift the pressure it imposes on families of political prisoners. Specifically, Saba Kord Afshari refused food and medicine to gain her mother’s freedom from jail.