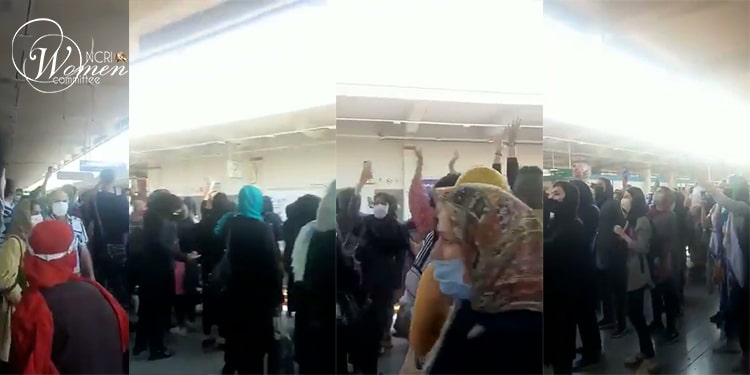 Chanting “Death to Khamenei,” “Death to the Islamic Republic,” and “Death to the principle of Velayat-e Faqih” (the absolute rule of a jurisprudent), these brave women in Tehran’s Sadeghieh Metro Station demonstrated the Iranian people’s anger against Khamenei and his detested regime.

The protest by women in Tehran came on the heels of widespread angry protests and uprising in Khuzestan Province for six days, showing the volatile condition of Iranian society.

Former member of the regime’s parliament, Kianoush Rad, acknowledged on July 19, 2021: “People’s trust in officials is diminishing by every passing day.” (The state-run Jamaran website, July 19, 2021)

Khuzestan’s protests over water shortages continue on the sixth day

Several young men have lost their lives after security forces shot them at point-blank range.

In Ahvaz, women stood up to the regime’s security forces with chants of Allah-o Akbar (God is great). Women had a remarkable presence in the protests in Ahvaz.

In many cities of Khuzestan, including Andimeshk, young courageous men lit a fire in the streets and blocked the roads, clashing with the regime’s security forces. They set fire to a State Security Force car.

In many of the videos posted from Iran, one can hear the shouts and cries of women who participated in the protests.

In an audio clip widely shared online, a woman in Susangerd tells the riot police: “The demonstrators are peaceful, why do you shoot? They didn’t take your water, your soil!”

This woman was among thousands of Iranian citizens who have taken to the streets of more than a dozen cities and towns in Khuzestan demanding access to drinking water.

On the same day, Vatan-e Emruz daily wrote: “The tsunami of discontent has manifested itself in Khuzestan.”

Courageous young men in Izeh also lit a fire and blocked the Izeh-Isfahan road. They declared on July 18, that they do this “in solidarity with the guys in Ahvaz.”

Water shortages are rampant in many Iranian cities and provinces, particularly in the south, and in Khuzestan and Sistan and Baluchestan Provinces.

In remarks to the open session of the parliament on July 18, Toghiani, a member of the regime’s parliament from Isfahan, said: “The shortage of water in Isfahan is three cubic meters per second in some districts. There was 17 hours of water cut-off in the provincial capital. Only 227 water tankers could provide water in a week time.”