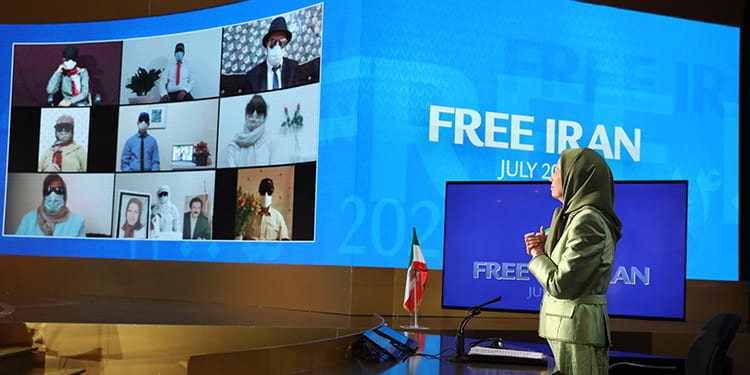 One of the most interesting parts of the Free Iran World Summit 2021 was the calls from inside Iran on the first and third days of the summit.

Members of the Resistance Units had also carried out some activities supporting the Iranian Resistance, the Free Iran World Summit, and the Ten-Point Plan of the President-elect of the National Council of Resistance of Iran, Mrs. Maryam Rajavi.

One thousand members of the Resistance Units also sent brief video messages to the summit, which the audience welcomed.

Some 30 members of the Resistance Units contacted live from inside Iran, nine of whom spoke as representatives to the summit. They were all very excited to talk directly to the participants in the conference, particularly to the Iranian Opposition leader, Maryam Rajavi. Following are excerpts from the calls by five women.

On the first day of the summit, Somayyeh from Shiraz said:

I am thrilled to be with you at this gathering. (The mullahs’ supreme leader, Ali) Khamenei thought he could intimidate and terrorize the public by designating the henchman of the 1988 massacre as president, to no avail.

Another caller from Karaj, Sepideh, said:

I am tremendously happy to be able to talk to you. We are ready to uproot this filthy regime. Maryam, you are our role model in our fight against the regime.

On the third day, Mahnaz from Shahriar told the audience:

I am one of those who have lost their loved ones. The mullahs’ regime prevents our voices from being heard and from seeking help. Maryam, I am grateful to you very much for defending the rights of Iran’s women and youth. Your struggle inspires and motivates us in our struggle. I urge everyone to be our voice, particularly the voice of mothers who have lost their loved ones. Maryam, we are waiting for you.

In another one of the calls from inside Iran, Mahtab from Shiraz said:

I greet my dear Maryam (Rajavi) and my brother, Massoud (Rajavi).

I greet all the participants at this summit. I hail supporters of the Iranian people from all around the world.

I am a student, sick and tired of the present circumstances. I live only with the hope of tomorrow’s free Iran. Maryam, I am delighted to be able to speak to you directly.

Khamenei thinks he can prevent the uprisings by Raisi, the henchman of the 1988 massacre. But he had a miscalculation. We will overthrow him.

I am pleased to have known the Mojahedin (PMOI/MEK). Our sad homeland, Iran, will smile again with Maryam.

Another call from inside Iran was from Sepideh Sahar in Tehran:

I greet you with all my heart and soul. I am grateful to all supporters of the (Iranian) Resistance from around the world.

You cannot imagine how happy I am to be connected live to this extraordinary summit from Iran’s capital.

I am speaking to you on behalf of 1,000 Resistance Units.

Maryam, I hope this would be the last year when we watch you on TV. On behalf of all the Resistance Units, I want to pledge to have you in Tehran next year so that we can listen to your speech in Azadi Square.

I assure you that neither Khamenei nor Raisi would rest for a moment because of our activities. We will create a storm that would inundate the regime’s broken ship. We will bring you to Iran. The Resistance Units pledge to fight with all their love and existence to win victory. I pray to God to give us strength.