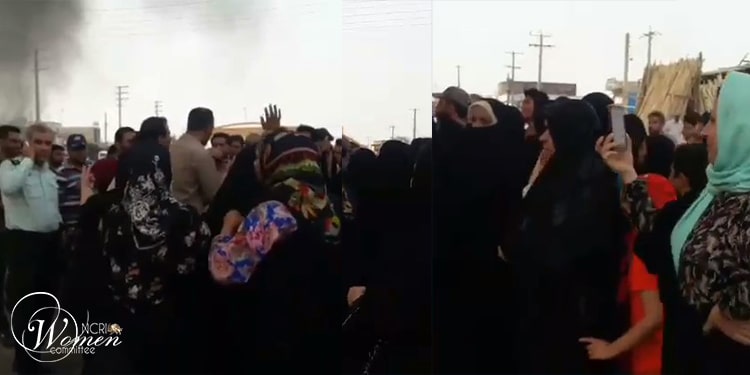 Karun is the main river in Khuzestan. The IRGC has taken many extensions from Karun to provide for its own industries, causing severe water shortages.

Women in Karaj took to the rooftops in solidarity with the protests in Khuzestan Province and chanted, “Khuzestan is not alone.”

Women’s protests are in solidarity with the uprising which started more than a week ago in Khuzestan and has been spreading to other cities and provinces.

The people of the oil-rich Khuzestan Province, lying next to Karun and Karkheh rivers, are thirsty. They do not have potable water. Women and children suffer very much from a lack of drinking water. Farmers have no water for their lands and live stocks many of whom have died.

Khuzestan is a very important province. Rich in resources, including oil; it has key ports in the Persian Gulf. It is the fifth most populated province with nearly 5 million populations and provides 15% of the GDP, second only after Tehran.

Many neighborhoods in the major city of Ahvaz, as well as Susangerd, Hoveizeh, Mahshahr, Khorramshahr, Andimeshk, Dezful, Shush, Behbahan, Darkhovein, and Izeh have been the scenes of these escalating protests where people have been chanting slogans such as “we will not accept humiliation, death to Khamenei, death to the dictator.”

To clamp down on protests, the regime has dispatched hundreds of well-equipped repressive forces from Lorestan, Isfahan, and Tehran, including several IRGC commanders, to Khuzestan. All of them have failed to stop the defiant youth and quell the expanding protests.

On the sixth day of the Khuzestan protests, a large group of people led by courageous female protesters in Tehran’s Sadeghieh Subway Station chanted “Death to the dictator” and “down with the principle of Velayat-e Faqih” as we witnessed similar protests in the city of Karaj near the capital.

“Demonstrators in the town of Aligudarz in Lorestan province marched to voice support for protesters in neighboring Khuzestan late on Thursday on the eighth night of protests. Videos showed protesters chanting slogans against Khamenei,” reported Reuters.

Amnesty International said on Friday at least eight people have been killed during the week-long crackdown.

The Iranian regime has curbed internet access in the past during unrest to prevent protesters from posting videos on social media.