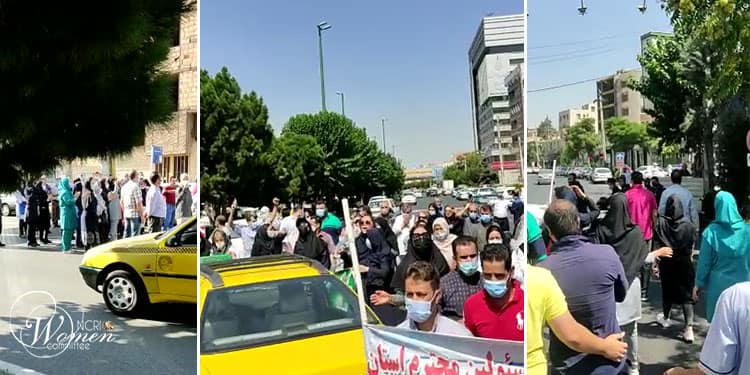 Scenes from protest march by nurses and hospital staff in Karaj

The 12th day of nationwide protests in Iran witnessed the cries of “death to the dictator” by hundreds of defiant youths in the heart of Tehran, the Iranian capital, on July 26, 2021. Participants in the daring protests in Tehran also chanted, “Khamenei, shame on you, let go of our country,” “Tanks, guns (are not going to save your regime), the mullahs must go,” and “Neither Gaza nor Lebanon, I sacrifice my life for Iran.”

The nurses and medical staff of the main hospital of Karaj also marched in the city on Monday, July 26, with chants of “death to the dictator.” They demand their past-due wages and salaries. Chanting, “One less embezzlement will solve our problems,” they called for the uprooting of oppression.

In the evening, residents of the Fardis district of Karaj took to the streets. They chanted “death to the dictator,” “from Karaj to Khuzestan, unite, unite,” and “Iranians die but will not accept humiliation.”

Women had a prominent presence in both protests in Karaj.

In Kermanshah (western Iran), residents clashed with security forces. Dozens of cities have joined the protests in Khuzestan and risen in their cities.

The NCRI’s President-elect Maryam Rajavi said, “The sacrifices of martyrs in Khuzestan now echoes in the cries of ‘Death to the dictator’ in Tehran’s central streets, near Khamenei’s headquarters. The uprising carries on for the 12th day showing that the henchman of the 1988 massacre cannot save Khamenei from his certain demise.”

Since December 2017, Iran has seen several nationwide protests against the clerical regime and calling for an end to dictatorship. This year, protests started in the impoverished Sistan-and-Baluchestan Province. The regime’s sham presidential election met with a nationwide boycott, the flip side of the anti-regime protests. Then the contract workers of the oil, gas, and petrochemical industries went on strike complaining about deplorable working conditions and low wages.

The recent chain of protests started in Khuzestan against shortages of water on July 24, 2021.