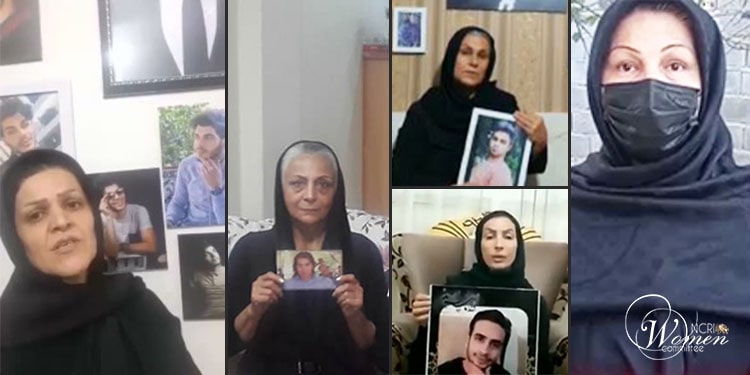 The mothers of Iran martyrs express their support for the protests in Khuzestan and other parts of the country. At the same time, anti-regime protests with the motto of “death to the dictator” continue in various parts of Iran, and women are part of these protests.

Mothers of Iran martyrs Navid Behboudi, Mehrdad Mo’infar, Pejman Qolipour, Milad Mohagheghi, and Amir-Hossein Zare’i –all shot to death by security forces during the November 2019 uprising—posted messages to declare their support for the protests in Khuzestan.

Moreover, the mother of Amir Arshad Tajmir also posted a message. Her son, 25, was crushed under the wheels of two State Security Force vehicles that ran over him three times on December 27, 2009, at the height of the 2009 uprising against the clerical regime.

In her message, the mother of Mehrdad Mo’infar said, “I declare my support for the brave people of Khuzestan. I hail all the dear people of Khuzestan and the brave people of Tabriz. I hail all the arisen cities, particularly the dear residents of Tehran. Demands for water and thirst must not be answered by bullets… The grieving mothers who seek justice for their children stand by the mothers who have recently joined our ranks. They are not alone.”

Mrs. Batoul Hosseini, the mother of Behnam Mahjoubi, who was killed while in detention, said in her message, “I declare my support for the grieving mothers of Khuzestan… I warn those who ordered the troops to open fire on our country’s youths that we will persevere and defend our rights. Stop your killing machine. The answer to demands for water is not bullets. I am a Khuzestani, too.”

Protests continue in cities across Iran

Protests in solidarity with the uprising in Khuzestan have continued in various cities.

In Baharestan of Isfahan, people gathered on July 27 to protest the power cut-off. They chanted, “Khuzestan, Isfahan, unity, unity!” They tore down a large banner of Khamenei and set it on fire, a young woman reported from Baharestan.

The residents of Tehranpars district in the capital also took to the streets on Tuesday night, July 27, to protest the power cut-off. They confronted the IRGC Bassij agents and shouted “death to the dictator” and “death to Khamenei.”

In other parts of Tehran, people went to the rooftops at night and chanted, “death to the dictator” and “death to Khamenei.”

On July 27, 2021, there were more protests in various parts of Alborz Province in Karaj and Gohardasht, where people clashed with security forces and resisted their attack. They chanted, “No Shah, no [supreme] leader, death to the oppressor.” A group of women chanted in Gohardasht chanted, “So long as the mullahs are in power, our country will not be prosperous!”

There were more clashes and confrontations on July 27 between the people and the security forces in Darreh-deriej in Kermanshah, Ayvan-e Gharb (Ilam), and Kordkuy (Golestan).

On July 27, 2021, the retirees of Tehran and Karaj, including many women, held a picket line supporting the uprising in Khuzestan.