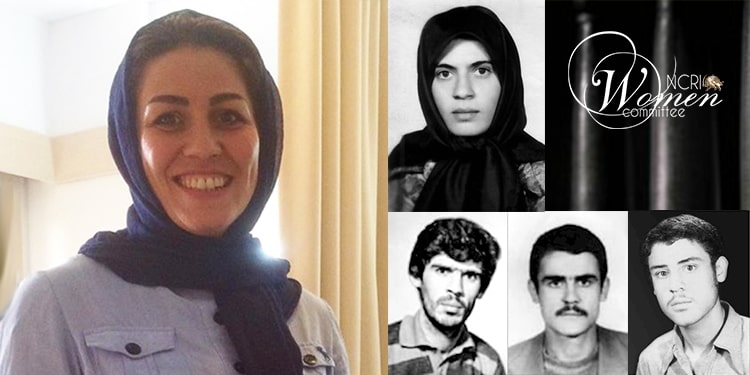 Political prisoner Maryam Akbari Monfared sent a message from the Prison of Semnan, expressing her solidarity with Khuzestan and the uprising of the thirsty people in that province.

In her message of solidarity with Khuzestan, she called for the prosecution of those who order the slaughter of protesters who are the same people who committed the massacre of 30,000 political prisoners in the summer of 1988.

Maryam Akbari lost her sister and brother in the 1988 massacre and two more brothers during the wave of mass executions in the early 1980s.

The translation of the full text of her message in solidarity with Khuzestan follows:

They quenched Khuzestan’s thirst with blood!

I do not receive the news here, even during the visits. The tiny opportunity to make a call in the presence of a security force is my only opening to the outside world. However, the reports by State TV have made me abreast of the devastating situation in Khuzestan.

Throughout these years, I have very well learned that what they deny is what has actually happened. This time, they are denying [the news about] Khuzestan and delivering their own lies. What I understood from the news is that they have responded with bullets to the thirsty people of Khuzestan, drenching that feverish land in blood. Summer is hot! Just like the summer of 1988. The same murderers were [at work] in those days. Then, they were members of the “death commission.” Today, they are posing as “president!”

Another carnage and another bloodshed. They take office while standing on a sea of blood of our loved ones.  However, the storm of call-for-justice movement will destroy their palaces.

The blood of the political prisoners executed in 1988 has now intermingled with the blood of the young people killed in the streets from November 2019 to July 2021 in Khuzestan and Lorestan. There is a 33-year interval but the blood of these young men in this geographic location [i.e. Iran] have joined to prove that so long as the masterminds and perpetrators of the 1988 massacre are not brought to justice, no generation will be safe. It is our firm resolve to put an end to this continued bloodshed and crime! We are determined to achieve justice!

I hail the courageous youths in the arisen cities. Despite being surrounded by walls, I see myself along their side. My heart beats with the rhythm of their footsteps in the streets. I bow before the thirsty martyrs of Khuzestan. I cry out again and I tell this regime: Why did you kill my sister and brother? So long as you are not tried in court to answer my question, I will not become silent, even in the hellish prison of Semnan!

Born in 1975, Maryam Akbari Monfared has three daughters. She was arrested on December 31, 2009, after the tremendous uprising on December 27 that year which shook the pillars of the regime.

In June 2010, the Revolutionary Court of Tehran handed down a 15-year prison sentence for Moharebeh on the alleged charge of “membership in the People’s Mojahedin Organization of Iran,” a charge which Mrs. Akbari has never accepted. She has been in prison without a single day of leave since the day she was detained.

On March 9, 2021, she was violently sent to exile from the women’s ward of Evin Prison to the Prison of Semnan where she endures more pressure and restrictions.